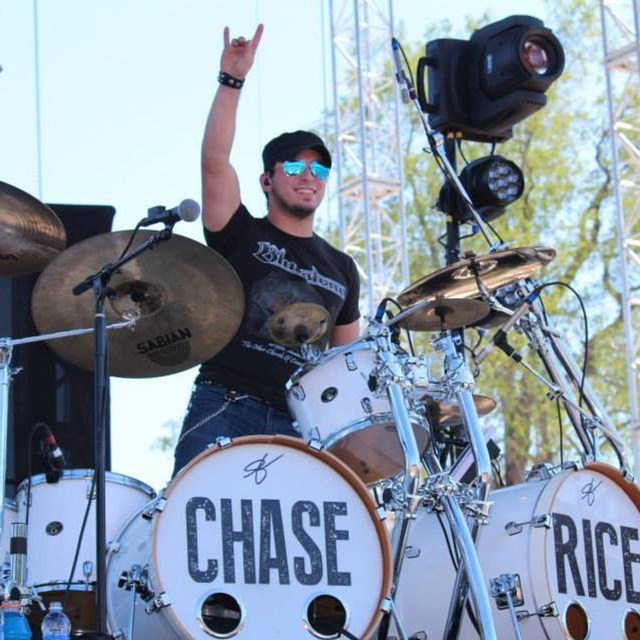 It’s hard to find a drummer that rocks out as hard as Aaron J. Levin does. No matter what stage, which city, or how large or small the crowd is, Aaron is an entertainer on all levels. At the age of 6 months old, Aaron was introduced to the drum sticks for the very first time by his father, Allen Levin, a lifelong drummer that at one point was a professional drummer. The elder Levin taught Aaron all he knew about drumming, from the mechanics of the craft to the art of entertainment. He may not have known it at the time, but Allen had given his young son the greatest gift he could.
In the 2nd and 3rd grade, Aaron was known as the kid that showed up to school with his drum sticks in his backpack. During recess, while others were playing on the tire swing, he was sitting on the concrete stairs outside with his sticks drumming and singing along to Beatles’ songs. The Beatles were the first band to influence Aaron musically. Aaron’s dad had a kit set up that was identical to Ringo Starr’s drum set. This made practicing even more inviting to Aaron. To be able to play like Ringo and look like Ringo? Hooked!
After years of playing 60’s and 70’s music, Aaron got introduced to modern rock and metal. He had never heard of distortion, shredding, double bass drum, or “putting up the horns”. Around 6th grade, he began discovering the inner drummer in him which is the one we all know today. Because of his new genre selection, he began to expand his drum prowess and become a more skilled player.
While in middle school, Aaron’s parents divorced, which caused him and his younger sister to rotate weekends between his Mom and Dad. Around the 7th grade, when Aaron would stay with his father, they both had formed a great relationship with the drum department at Guitar Center in Chicago. Every other Saturday, Allen would drop Aaron off at Guitar Center to let him hang out and drum with the employees. He would play on the drums for hours while the workers and customers would sit down next to him and have drum-offs or teach him something new. This is one of Aaron’s biggest learning experiences of his career. It doesn’t seem like much, but to him, this was his world!

Aaron’s life truly started to revolve around playing drums. When he wasn’t at Guitar Center or practicing in his basement, he was jamming with friends or gigging around the greater Chicago region. He played in several bands while growing up including Shrapnel, Bloodshed Promise, Fat Cat, Scourge, and Skyler And The Skylarks.

Another passion of Aaron’s growing up was a desire to join the Marines as soon as school was over with. When he was in high school, he planned on joining right after. Aaron is the only son (he has an older and younger sister), and with that said, his parents pleaded with him to wait until after college to make that decision. After much retrospection, he attended college at Roosevelt University in Chicago. He earned his BA in Marketing Communications and graduated in December of 2010. In college, he met 2 other musicians whom he began jamming with. The trio later formed his first touring band called A Friend Called Fire. With AFCF, Aaron recorded two albums and toured across the country, all while attending college. While other students were partying on the weekends, Aaron and AFCF were rocking out across the US.

Throughout college, Aaron lived in several different apartments throughout Chicago. During his senior year, he met a tenant in his condo building named Donny that had recently just moved from Nashville. Donny and Aaron became close friends quickly. At one of AFCF’s upcoming shows, Donny came out and saw the performance. Donny, a musician in addition to being an extremely talented painter, asked Aaron after the show if he had ever consider moving to Nashville and drumming professionally. Aaron hadn’t, because he didn’t think he had the chops to do so, yet Donny assured him of something – he did.

Aaron visited Nashville three times for four days each time scoping out the area, networking, jamming downtown on Broadway, and mingling with the friends Donny had set him up with. When Aaron returned the third time, he knew what he had to do. In March of 2011, Aaron packed up his father’s work van and said good bye to his family, friends, and hometown. “I have jumped out of an airplane at 15,000 feet,” recalls Aaron, “but I still think that moving to Nashville was the scariest thing I have ever done.”

Unlike most people that pick up and move to Nashville, Aaron already had names, phone numbers, bars to hang out in, and knew, most importantly, how to network. “If it wasn’t for my little blue book,” says Aaron, “I wonder if I would have moved back home or something by now.” Aaron became known in Nashville as “the guy with the blue book.” Every person Aaron met, from a potential musician to gig with to a girl he didn’t want to forget, got a spot in the little blue book. “Nashville is a small town,” says Aaron. “Everybody knows everybody. You may be talking to a stocker at a grocery store but he is best friends with ‘so and so’ who does ‘blah blah blah.’ That is some important crap to remember! No contact is a sh*tty contact in Nashville! You never know who you are talking to. If you happen to be talking to someone that is a ‘nobody’… just wait! That ‘nobody’ can be a ‘somebody’ pretty damn fast. I mean hell, look what happened to me!”
It wasn’t all stages, parties, and after-parties upon moving to Nashville, however. Aaron struggled for months trying to make ends meet. Not many know this, but he was struggling so much, he took a job as a school crossing guard for a while. “You have any idea how embarrassing it is to literally be the youngest person by at least 40 years? Not to mention, I had a faux hawk at the time!” Eventually Aaron found a serving position that would be able to sustain him financially. He did keep the faux hawk for quite some time though.

In August of 2011, Aaron got a phone call from a drummer friend in Nashville. “Long story short, he asked me if I was doing anything at the moment and if I was free that coming weekend. I said I was. That’s when I was told he needed me to fill in for a country rock artist named Chase Rice. And that’s how it all began.” This was Aaron’s first country gig he ever had and had less than 24 hours to learn three hours of music he had never heard before.
“I was told,” recalls Aaron, “that when you find someone you believe in, don’t leave it. I believed in Chase.”