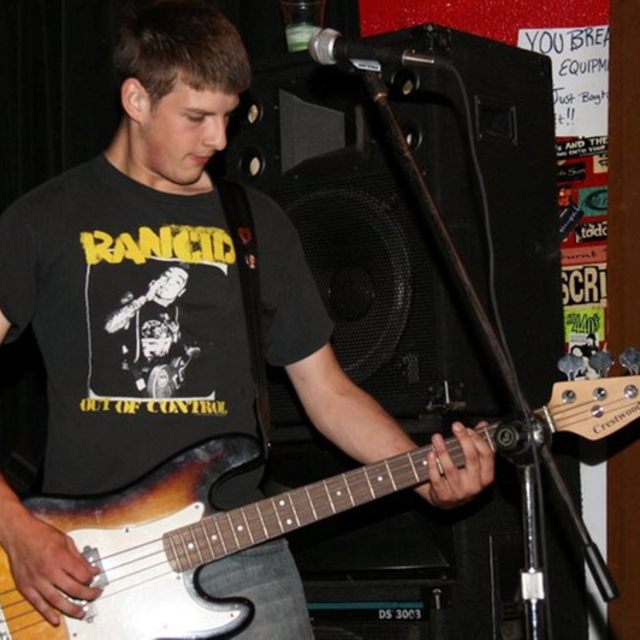 Here is a summary based on my solo project, Steel Reserve:

The story of the Grunge/Psychedelic band Steel Reserve has many roots. Initially, the band was formed in 2009 by several high school students from the Metro Detroit suburb of Dearborn, Michigan. They all attended the same High School and had the same fondness for music. The band name initially arose as a joke, due to the fact that one of the original guitarist/vocalists David Patterson consumed eighty ounces of the gruesome Malt Liquor Steel Reserve against the depths of his time and alcohol tolerance ratio. Steel Reserve continued on to play small gigs and two of the initial members disbanded.
An aspiring solo musician and recluse by the name of Anthony Enos joined David in Steel Reserve, upon meeting his most compatible and closest friend Bryan Wolf, of whom joined shortly after. The lineup consisted of David Patterson, Anthony Enos, Bryan Wolf and Michael Hane. In 2010, David and Michael were distanced; living on college campus and Steel Reserve became left to Bryan and Anthony. Two close friends of Bryan, Matthew Januskowski and Curtis Rutkowski joined in April of 2010 and the band was once again complete. Every member of the band had something significant to offer and they all shared a special interest for Grunge music, which is relatively uncommon in the predominant area.
As the year progressed, there were many conflicts regarding the band. There were problems regarding commitment, substance use, and a sense of focus and obtaining gigs. There were many jam sessions and a vast array of material recorded. Unfortunately, the potential of the band took a negative turn with the passing of beloved friend and band member Bryan Wolf in February of 2011. Following his death, a rough compilation of jams were released and played at his service. There are future plans to release a final compilation also. Matthew was last seen at Bryan’s visitation and has been out of contact since, despite attempts by Enos. Curtis soon went on to pursue automotive passions and ended up selling Enos his Jagmaster Guitar, of which became modified and customized to Enos’ preference.
Until July of 2011, Anthony Enos was depressed, dismayed and lacking belief of Bryan’s death. The focus became further diminished and substance use became a factor. A wake up call to Enos was established on July 9, 2011 when he was arrested for a DUI. Upon returning home, Enos decided to continue the legacy of Steel Reserve by beginning work on a new album, titled “Up in Smoke, Down the Drain & to the Ocean”. This would be Enos’ third solo record and the longest as well. It was released on February of 2012 and was the first work for Enos to patent. From that point on, all of Enos’ solo work, including prior work would thrive under the name Steel Reserve. The first two records independently released by Enos were titled “Mental Pictures” and “2010”, including an experimental record with a reclusive friend Coner Hanna under the name “Enos, Coner & Nash”.
All records were completed using computer software and a recording interface, along with various recording techniques of Enos. Although his resources are very limited, he is notorious for producing high quality recordings and independently producing material on a consistent basis. In honor of Bryan Wolf, Enos continues to remain the one man band, Steel Reserve until further notice. Recording of the fourth Steel Reserve record, “Significance” began on November of 2012 until its March 2013 release. “Significance” has many musical influences behind it and is considered very raw in sincerity and honesty. It is the most recent work. The concept of the album is solely based on the significance and irony of life and its conflicts. The song “Achiever” features Bryan Wolf on bass guitar and acoustic guitar on the closing, psychedelic track “Significance”. The song “Seven” features former Steel Reserve guitarist Curtis Rutkowski on guitar.

I currently have idle projects going via myself and separate parties of close friends putting together separate types of music. However, I have high hopes of meeting, communicating and hopefully getting something set in stone with musicians that are compatible and interested. Feel free to drop me a line and we can exchange feedback. Thank you for your support!