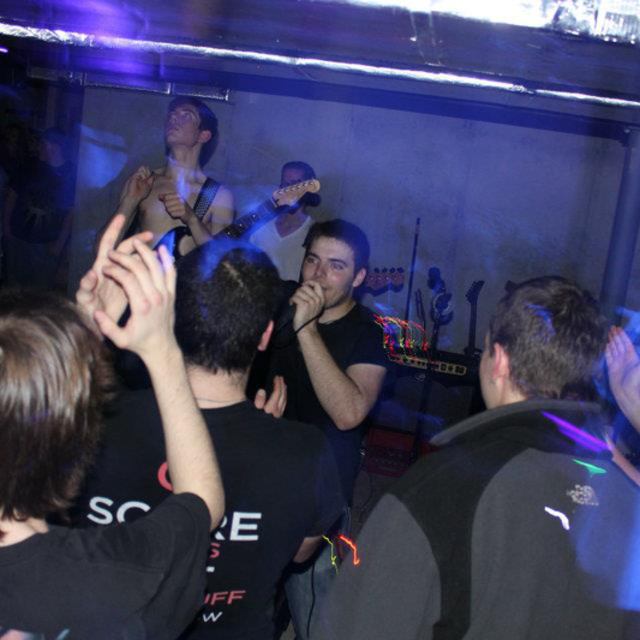 Andrew "Forks on a Plate" Paglia was put in touch with Kyle Check in mid-summer 2009 via the pair's mutual guitar teacher. Expecting a hurricane of guitar-noobishness, Andrew was astounded to find a worthy musical adversary in Kyle. Each man looking out for his own interests, the two decided to join forces and recruit a couple of dudes in order to craft some progressive grooves.

Legendary status runs in families, it seems. The Check/"Plate" duo hit an artistic roadblock of sorts without a percussive warrior at the drum kit. As luck would have it, however, Ryan Check was soon volunteered by Kyle to lay down some double-elbow gravity blasts.

Whether by fate or by chance (you decide!), another artist named Chris Hamilton would soon enter the fray wielding a bass. The introduction of his bass sorcery marked the first real incarnation of A Forgotten Force. The name came about from a brainstorming session in Kyle's garage, I think.

The four-piece rocketed to a vitriolic level of musical fury within few weeks. But the wise warlocks knew that their lineup was not yet complete. A gold-throated front man was the only missing piece. Luckily enough, Sam "the man" Wittman was kind enough to lend the band his larynx after they told him how great they were.

After a few shows with their new lineup, the band was riding high. Women fainted at the sight of them, while tons of males stayed conscious to bob their heads to the grooves. All good things must end, however, and so did things seem when Chris announced his departure in favor of pursuing his career as an astronaut. The band meandered about in a fog for a few months looking for a new body to fill the vacancy.

Things picked up again when AJ Simmons, devourer of worlds, decided to seek a new vocal challenge in singing for A Forgotten Force. Sam was put on full-time as the band's bass shepherd while AJ assumed the microphone. Such is the band's current lineup.