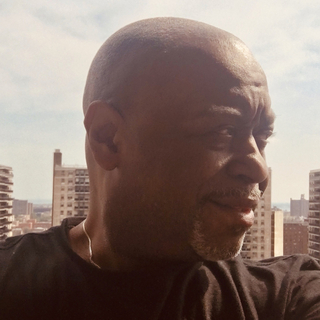 Alfredo aka Fred aka uncle catfish Alias, is a Drummer for 35yrs from Bronx, New York. He began as a young boy in Upper West Side Manhattan sneaking out late to join to the New York music scene. He filled his ears with the funk-ness of Mikell’s and The Cellar. Growing up with a lineage of incredible musicians such as Sonny Stitt and Don Alias, Catfish was destined for greatness.
After the passing of his grandfather, a talented pianist and spiritual arranger, he moved up to the Boogie Down with mother, Sarah Boatner Alias, a well-known jazz alto. During his prime years, he traveled and worked with Grammy award winning artists such as D’Angelo, Cassandra Willson, Busta Rhymes, Mos Def, LL Cool J, Joe Thomas, and Average White Band.
Now with wisdom of his past, Fred Alias has been reborn as Uncle Catfish, a man of producing talents and vision to help young artists have fun with music. Through his production house CatscanProductions, Uncle Catfish writes and produces beats within the Hip Hop, RnB, Neo soul sphere with samples of major hits since the 90s. With a great ear for music and a huge repertoire of songs, Uncle Catfish has perfected his DJing abilities getting hired for hip house parties in New York. He also loves consulting with young artists and bringing their ideas into recorded pieces.
Please explore the site and keep in touch!

Screen name:
alfredo1285228
Member since:
May 26 2018
Active over 1 month ago
Level of commitment:
Touring
Years playing music:
35
Gigs played:
Over 100
Tend to practice:
More than 3 times per week
Available to gig:
4-5 nights a week
Most available:
Days