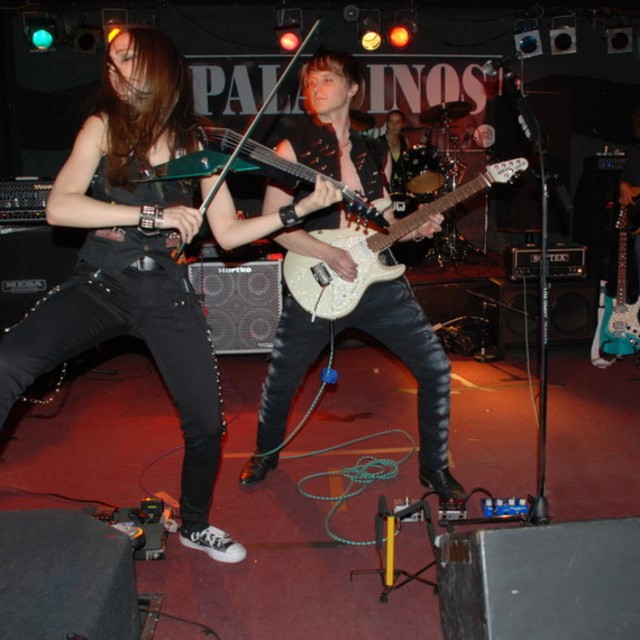 Versatile as well as professional, Alyson Montez has dedicated the past 20 years of her life to the study and pursuit of a career in music. Classically trained and well-versed in orchestral repertoire, Alyson has also made a name for herself as a Grammy award-winning mariachi in the Latin community with the Mariachi Divas and a heavy metal violinist in the rock world.

Armed with an acoustic violin and 6-string fretless and 7-string fretted custom electric Viper violins, she balances a multitude of different styles in her daily life. She can currently be seen live with Gretchen Bonaduce's Ankhesenamen, Chicoa, Mariachi Colibri and the Jeff Musial Band, and offers lessons to children ages 2 1/2 and up.

Ankhesenamen with The Naked Eyes. "Naked Eyes was a British synthpop band popular in the 1980s. The duo is known for their singles: a cover of the Burt Bacharach/Hal David standard "(Thereâ€™s) Always Something There to Remind Me" (Bacharach himself has cited the cover as a personal favourite); and their subsequent hit "Promises, Promises"." Show at The Brixton Southbay - 100 W Torrance Blvd, Redondo Beach, California 90277 - $15, 21+

Ankhesenamen opening for The Tubes! "This SF based band was known for its live performances that combined lewd quasi-pornography and wild satires of media, consumerism and politics. Their hits include: "Donâ€™t Touch Me There," "Young and Rich," "White Punks on Dope," "Prime Time," "Donâ€™t Want To Wait Anymore," "Talk to Ya Later," "Sheâ€™s a Beauty," "Tip of My Tongue," "The Monkey Time," "Piece by Piece" and many more." Show at The Brixton - 100 West Torrance Blvd., Redondo Beach, California 90277 - $25, 21+

Announcing the premiere of the Jeff Musial Band, including a live performance of Alysonâ€™s "Robot Octopi Rendezvous"! All original music and a couple covers, fun for everyone! See punk rock flailing, metal wailing and songs thatâ€™ll just get you deep down inside! Located on the Orange Line, so you can get drunk off your ass and not have to drive home. JMB goes on at 11pm. Paladino's - 6101 Reseda Blvd., Tarzana, California 91335 - $10, 21+

The premiere of "Reinventing Bonaduce", featuring Ankhesenamen, tonight on Fox Reality! Check your provider listings for channel number and showtimes!