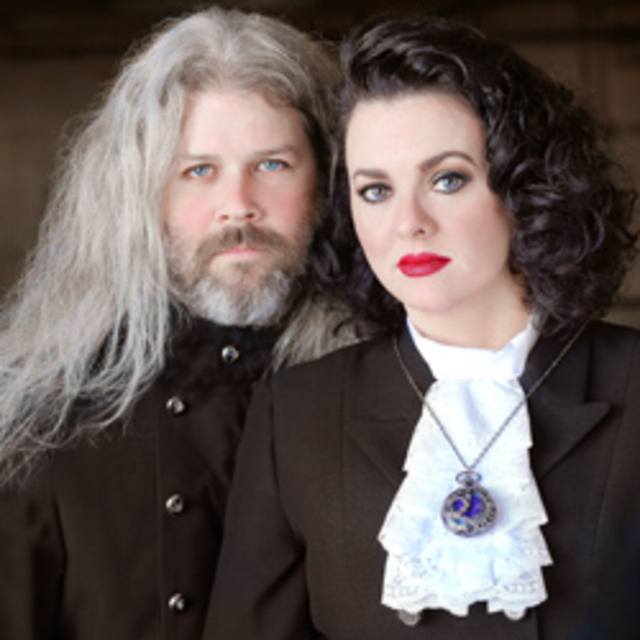 BIOGRAPHY
Female-fronted symphonic metal duo Anatomy of the Sacred makes elegant, soulful music ablaze with powerhouse vocals, orchestral melodies and radiant harmonies draped over driving and resounding rhythms. Skilled songwriters, composers and artists Brenda Michelle Robinson (vocals) and Shane Krout (bass, guitar, vocals) experiment with opulent textures and unleash lyrics that float atop a sophisticated, intricately-woven tapestry overflowing with plush layers of electric guitar and bass. Anatomy of the Sacred’s debut EP, Ashes to Ashes is an electrifying journey through the ever-twisting avenues of life. It is a formidable collection of lingering songs that explore humanity’s ongoing struggle with themes such as lust, reflection, disappointment, death, fear and hope.

The moniker “Anatomy of the Sacred” captures the essence of the South Central PA-rooted group’s music and its message, both of which are inspired by its visionaries’ admiration of dynamic artists such as Trans-Siberian Orchestra, Evanescence, Stream of Passion and Delain. The duo’s detailed work examines the anatomy of the most sacred human elements that comprise the foundation of existence, including love, loneliness, passion, joy and longing.

The musical partnership between Robinson and Krout began in 2011 when Krout was in search of a lead vocalist with an acrobatic voice. Floored by Robinson’s colorful tone and her ability to easily float between ethereal soaring and earthliness, he invited her to join his symphonic metal project, Shades of Autumn. The two found perfect synergy as songwriters and lyricists and began to churn out a fountain of stunning material. Realizing that the fresh fruits of their creative efforts represented a new sound, the two dreamed up Anatomy of the Sacred and began to imagine the songs for the first EP.

Both members of Anatomy of the Sacred have enjoyed a rich relationship with the musical world during their diverse careers, which lends depth to their collaboration. Robinson began singing and writing songs in childhood and has never stopped sharing and developing her talents. Originally from Kansas City, MO, she was a lead soloist and songwriter for the Sheffield Family Life Center Choir for many years. As a Christian recording artist and soloist, she has opened for Dove Award nominee Vernessa Mitchell and had original songs performed by celebrated Christian artists Donn Thomas and Calvin Hunt. She has performed at churches, prisons, private events, funerals, weddings, banquets and high-profile political events. Additionally, she was the lead singer for the Springfield, MO-based band, SIDEFX before moving to PA, where she started the woman-led band, Traces of Eden before forming Anatomy of the Sacred.

A lifelong multi-instrumentalist and masterful arranger, Krout began on brass instruments and played with bands and orchestras, where he learned to appreciate the lush, romantic music that now influences the songs of Anatomy of the Sacred. After picking up guitar, bass and piano, he became the bassist for the band Legacy, which was his foray into a string of classic rock, hard rock, pop and metal bands, including Slik Mickey, Dilemma, Torqued, No Surprise Band, Tragika and Shades of Autumn. He continues to be an in-demand guest artist with many local bands in PA.

With the distinctive honor of being the only female-led symphonic metal band in PA, Anatomy of the Sacred is now ready to tell the tale of its first chapter thanks to thoughtful time spent writing, rehearsing and recording material for its freshly-recorded masterpiece, Ashes to Ashes. The album has come to fruition with the help of numerous musicians, engineers and artists and also features the talents of Clinton Washington from Season 8 of NBC’s The Voice (Track 6 “Farewell to the Light”). The band is preparing to film two music videos in Summer 2016 and is planning to host an EP Release Show.