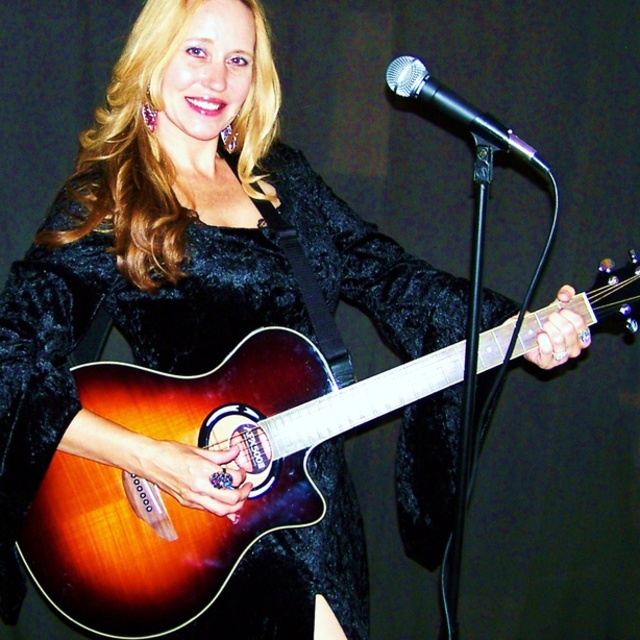 Annie Rhodes has been a full-time professional performing artist for over 10 years now with her multi-talent, and her sexy, sultry, versatile voice. Annie also fronted her duo and band named, “Annie Rhodes & Company”, and the duo toured all around the eastern seaboard down to Key West. Annie has also worked for Norwegian Cruise Lines, Royal Caribbean, Carnival and Celebrity Cruise Lines as a “Feature Entertainer”. The passengers’ on the ships gave her so many wonderful comments, and she was able to meet and perform for people from all over the world! Annie performed her specialty shows aboard the cruise ships, and the passengers’ absolutely loved them! She performed her “Classic Country Show”, her “Contemporary Country Show”, her “Classic Rock Show”, her "Totally Awesome 80's Show", and last but not least her famed “Stevie Nicks and Fleetwood Mac Tribute Show”. Annie considers herself a “Gypsy”, for she has performed around the globe. Beautiful and heartfelt lyrics in a song capture Annie’s attention every time, but most of all, she loves the songs that get her up dancing! Singing is her way of expressing herself to the world. In 2012, Annie was hired to be the lead female singer, dancer, and actor in the Broadway style show “The Missouri Hayride”. While touring with the show, Annie performed as Loretta Lynn, Patsy Cline, Dottie West, and many more Country Music Diva’s. She has now returned to the Rochester area, and is currently booking shows in the Northeast.

Imagine being entertained by many of your favorite musical stars in one extraordinary show! Annie Rhodes is the Ultimate “One Woman” Show! She may be one woman, but she performs with only the best in high-quality equipment run by her soundman. And don't forget that she does have a "Full Band Sound"! She has arranged and entitled her own specialty shows, such as her “Tribute to the Diva’s”. Annie performs a wide variety of musical styles from different eras during her show, and she entertains and engages the audience with props, costumes, and many musical impersonations of Stevie Nicks, Patsy Cline, Cher, Wynonna Judd, and more! Also, she performs a variety show encompassing multi-genres of music into one show. In Annie’s opinion, her voice is the most important instrument in her show. Annie also performs with her professional sound system, her custom electric and acoustic guitars, and her percussion instruments. She always loves the opportunity to showcase her own original material into her show. Annie is a super-visual vocalist and musician. She is an audience favorite with the expertise to emulate classic singers’ and songs’ from the 1940’s to the most modern material on the charts today. Every year, she performs classic Irish songs for St. Patty’s Day celebrations, Halloween parties, Christmas songs for Christmas parties, and the ever-popular New Year’s Eve party! In fact, she hasn’t had a free New Year’s Eve in over 10+ years! But believe me, she isn’t complaining! So many people are amazed at how much Annie sounds like Stevie Nicks, Patsy Cline, Wynonna Judd, Cher, and many more! But she says that she adds her own style to each artist: a touch of country: a touch of rock ’n’ roll. Annie’s show can be tailored to each individual event, whether a stage show, corporate event, wedding reception, or any event that needs the added touch of expertise, professionalism, and fun that Annie Rhodes can bring!!!

Too many musicians to mention!