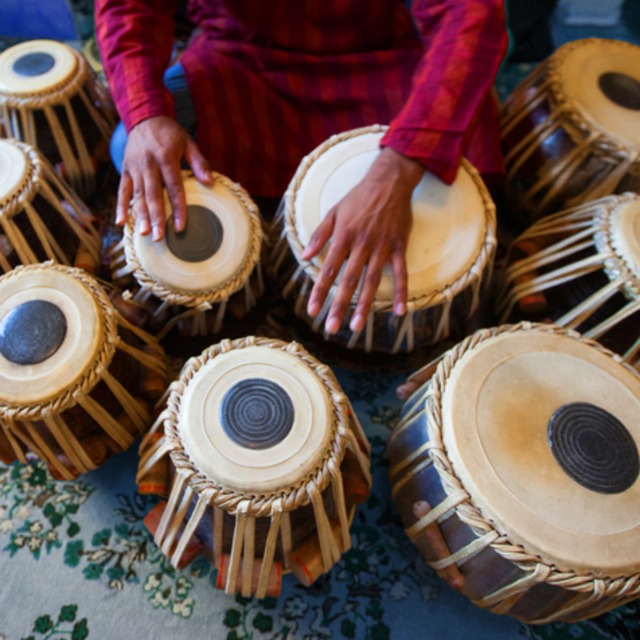 Art of Tabla is dedicated to educate and promote “Indian Tabla” reach a world-wide audience. When it comes to percussion in the world of Indian music, the Indian tabla drums are the most popular. Their distinctive sound has made them a favored addition to nearly every kind of music in the world today. Tabla drums are featured prominently in soundtracks and movie scores as well. The right-hand drum is known as the “dayan.” It is the smaller of the two drums. It is a conical drum shell carved out of a solid piece of hardwood, with the bottom slightly larger than the skin-covered top. The left-hand drum is the “bayan,” and is shaped like a hemispherical bowl made of copper, brass, bronze or clay. Together, these two drums create a mix of sounds.

It is difficult to pinpoint the time in history when the tabla emerged as an instrument. The drum set in use today has gone through a long process of development that began in ancient times. The Indian tabla drums rose to prominence in the Delhi royal courts of the 17th and 18th centuries, but they originated far earlier. There are sculptures of these instruments that date back thousands of years. Many believe that that tabla drums evolved from the mridangam or pakhawaj. Although the tabla drums were originally an accompaniment to other classical musical instruments, they have now achieved the level of a solo instrument.

Indian tabla drums are a rewarding introduction to the Indian musical sound. They may seem simple at first glance, but actually require intense training and skill to master. The most ingenious invention has been the making of iron and stone powered pastes to be used as weights on the skins of the tabla to produce harmonic overtones. Because of its versatility, the tabla has become the most popular rhythmic instrument with a vast solo repertoire of its own.