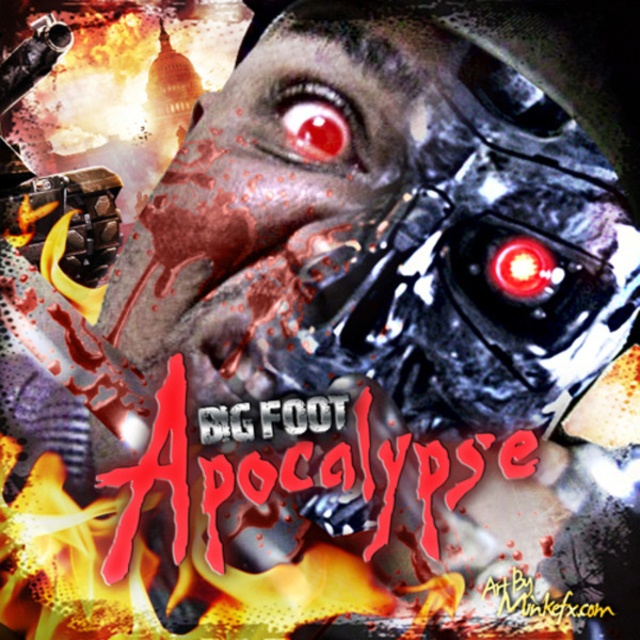 hip-hop rap underground with a twist of metal/indie rock formats dark horror..... Christopher t. barr aka "BIGFOOT" was born and raised in the bronx.This rap artist has a lot to put on and bring to the table.He first stepped on the scene in the summer of 97' on the independent label,ZESTLAND RECORDS.songs-"CANNOT ESCAPE" and"MULTIPLE STAB WOUNDS", which recieved major underground play nation wide on stations such as: WPBX,WIUS,WBCR,WQHT(new,york's hot 97),88 HIP-HOP(internet radio),WXCI,WRAS and also charted CMJ.What really put him on the map,was his conceptual style of rap and unforgetable lyric lese imagery, whivh help forge and create the legend of" BIGFOOT".While touring to cities like Philadelphia with"CELLAR DWELLERS,RAMPAGE(the last boyscot).He caught the attention of some major rap artist across the country and became the opening for such atrist as: SADAT-X, BOOTCAMP CLICK, and X-ZIBIT. Out in Oakland, SONZ OF MAN,(whu tang) GENIUS,GZA, in spring valley open up for LITTLE KIM&JUNIOR MAFIA and the infamous BIGGIE SMALLS at the how can i be down out in Miami,Florida. During the years in the underground he has since created a name and following. Still striving for a throne of his own. He started his own label"SWAMPCITYMUSIC".Certainly, all you undergrounds heads have collected MILITARY KOMBAT feat. SHABAAM SAHDEEQ, BRING IT, INVASION,MID-EVIL, LEGACY OF RAGE,FOOTS WORLD,BX-CONFIDENTIAL and ALTERED STATE just to name a few!!. They all have street promotion and independent disttributors such as: BUDS,LANDSPEED, FAT BEATS(L.A&AMSTERDAM),DANCE FLOOR RECORDS, thanks to them they made sure that everybody from D.J'S to all the mom's & pop's store have a BIGFOOT records.With all these accomplishments it has landed him a major record deal with TOMMYBOY records in 1998, with the release of"HEAVY METAL ARTIST" b/w "THREE MINUTES TO DETONATE".That him performing at the local and under ground clubs from NYC to LOS ANGELES and appearing on the BLAZE BATTEL TOUR.That charted heavy rotation at all the underground college radio stations also featured on the" BLACK MASK " sound track starring "JET-LI" hie first U.S> appearance with MEL GIBSON and DANNY GLOVER in LETHAL WEAPON (4). He is currently working on the album titled "THE FIVE BOROUGH NIGHTMARE" hip-hop heads will see why he is here and here to stay ...........

Screen name:
bigfootnyc
Member since:
May 01 2010
Active over 1 month ago
Level of commitment:
Very Committed
Years together:
1
Gigs played:
Over 100
Tend to practice:
More than 3 times per week
Available to gig:
1 night a week
Age:
48 years

microphone and some dope beats