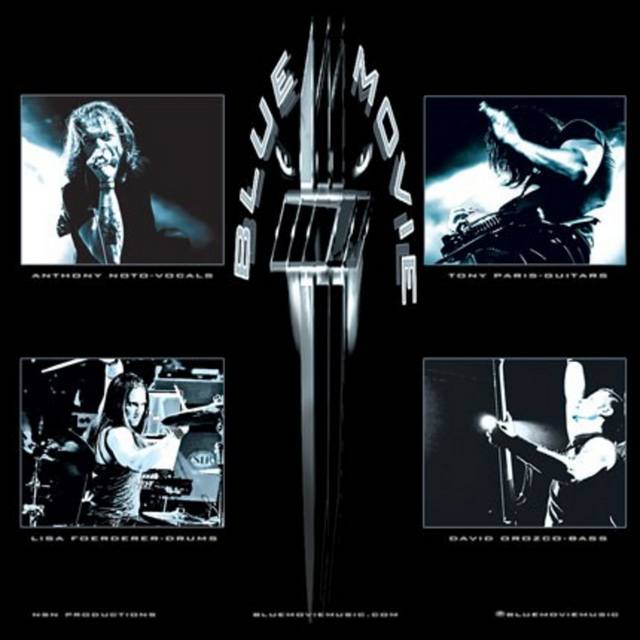 From inception, Blue Movie has set out to make a unique collection of original music that treads the lines between musical genres. Their sound encapsulates many of the band's musical influences touching on a variety of genres such as heavy rock, metal, industrial, goth, synth and pop. This genre bending sound is transferred to the stage at every live performance via an extremely high energy, theatrical stage presence that lends itself to the dramatic emotion of the music.

Discography: From 2012 to present the band has released numerous albums, along with many music videos and comic books.

The debut EP ,“8MM Love Songs”, and it’s single, "Murder Will Out” , was released to great reception and inspired the bands first comic book titled "On the loose".

The sequel EP, "Delusions in Technicolor”, further expressed the band's need to grow their sound while striving to push the limits of their writing and production skills in the studio. The single "Sewing Shadows” set the mood for an extended music video and two new comic books. "Survive the Five" & “Revelations".

The third release, "Synthetic III”, embraced a darker tonality along with some lineup changes. The title tracks “Nebula” & "Electric Water” were released alongside another comic titled "Echoes Across Time” and spawned the idea for an alter ego to Blue Movie under the moniker Black Film which is used on the page and off to express different facets of the band’s personality.

The latest release, "Broken Machines” , sees the band reaching deeper then ever before to create a culmination of sound and emotion that rivals anything they have done in the past. Released alongside a new digital comic of the same title and two new music videos for the tracks “Prisoner” & “Cold Song”.

The band and their comics have also been featured at NYC comic con three times.

Blue Movie has played in support for acts such as Jinjer, Otep, The Hollywood Undead, Buck Cherry, Thrill Kill Kult, Genitorturers, Fire From The Gods, Lynch Mob and many others.

Press: "Blue Movie's show is full-on energy with relentless, solid metal riffing. The band tore through a crackin’ set of pummelling tunes before taking a well-earned rest. And their drummer is an absolute machine. She is fantastic.” - RPMonline.co.UK