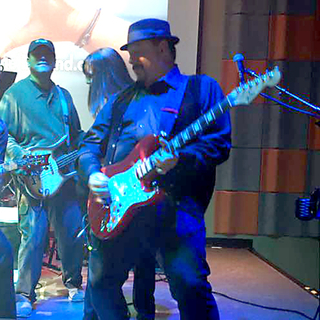 Experienced guitar/guitar synth not currently seeking other projects. I play in a band performing covers of pop songs from 80's to current and Motown. With the guitar synth I play lots of sax, organ, piano, brass and other parts. I also have written a few songs including "You're On My Time Now" by The Fringe Benefits which went to #1 on the Radio Indie Music Chart May 2017.

I act as manager for the band handling contracts, writing the paychecks, updating the website, other marketing.

My guitar style is most heavily influenced by Eric Claption but also Hendrix and Stevie Ray Vaughan. Currently I play mostly synth performing covers of songs by Aretha Franklin, Michael Jackson and various pop-rock artists of 80's to current.

I have a Fender Strat w Fishman Tripleplay synth with sounds in a laptop. I have a second system for backup. No amp or speaker as I use an in-ear monitor which is powered by my pedal board. One unit replaces monitor, guitar amp and synth. It's lighter, sounds better than my fender amps and works great with the synth sounds. It also allows me to hear myself very well without blasting the stage - in fact I have to add my guitar into the monitors for the other band members to hear.