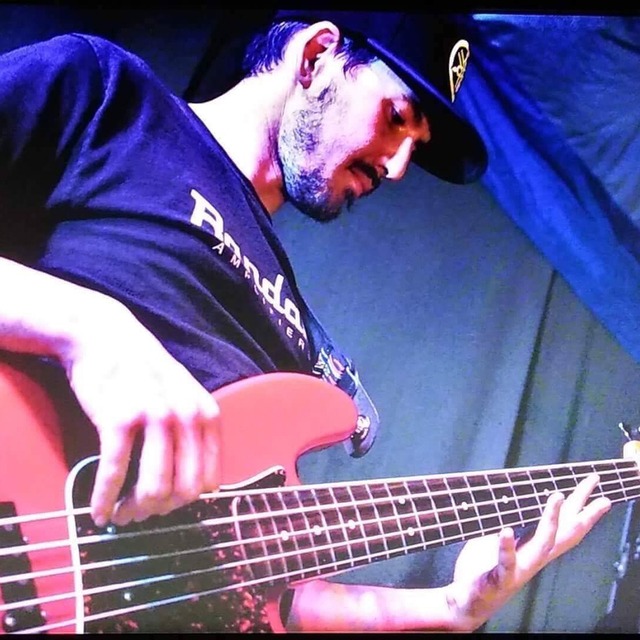 Hi everyone, my name is Cameron... I've played bass and guitar for roughly seventeen years, played for/in more established groups than I have fingers and looking for another band to jump in. I'm not a simplistic, root note bassist as in alot of rock/metal bands. Don't get me wrong, I know alot of badass metal bassists but the vast majority... you know what I'm getting at. I'd like to humbly consider myself quite proficient as a rhythm guitarist also and have played in a few bands doing so. I sing as well if needed for backup and shared vocals. I've played in many reggae, ska, funk, punk and "Offspring, Pennywise, Rise Against" style rock bands on both guitar and bass. Even a couple metal bands as well but it's not my favorite to play on stage. The way I play on the bass is using "walking" major/minor scales for the verses, chorus, bridge and so on (unless unnecessary of course). As I bet all of you know... The guitarist and more specifically the rhythm guitarist(usually, definitely depends on genre) plays one or sometimes slides to two chords on a four count, I'm playing a majority of all the same scale notes during the same four count. Check out the bassist for bands such as "Kool &amp; The Gang", "Lakeside", "The Gap Band", "Earth, Wind and Fire", "Parliament", "Rick James", "Chic", "Rebelution", "Iration", "Streetlight Manifesto", "Reel Big Fish", etc... You'll hear what im talking about.

Old-school funk is what taught me how to play bass, I mean... how to REALLY play a bass. A whole lot of different genres are my influence on guitar. Listening at home to Pandora with a guitar or bass in my hands, I can typically learn the song by the time the song is over, or at least get it really darn close. Unless of course it's something friggin' crazy then it might take me a little while, I'm not a savant. The radio was/is my only teaching tool I use, nobody in my family has played an instrument for two generations so I had nobody to teach me. One thing I think helps is I'm left handed but I play conventionally so my "good" hand is doing all the complicated work. There was no left handed guitar laying around when I began to learn so that's what I got stuck with.
I've played at many big venues and events sharing the stage with many big name bands and artists for the last ten(ish) years. Alot of us have, probably including you. I've got hundreds of pictures proving this as well. The best compliment I've ever got was from Afroman while I played in a ska band. Said after I got off stage, "What the hell happened to you?!? You're the white boy with some soul! You were supposed to be black..." I laughed my ass off at that one and had a great time that night.

On another note... I'm a really easy going, nice, humble, respectful guy and very easy to get along with. Alot of people consider me as "the nicest person I(they) know", I really enjoy hearing that one. :-) I'm doing this as well to try and meet new people, make some friends. I moved here from the high desert two years ago and only have "acquaintances" basically.
I don't drink so you don't have to worry about me being sloppy drunk and not able to perform at a show. I'm definitely not into any hard drugs either but being around people enjoying themselves, drinking and smoking some pot really doesn't bother me at all. I'm not an unemployed deadbeat either, I have a great job as a motorcycle tech where I make great money. I work six days a week getting off at 6:00/7:00pm, Sundays: 4:00pm and Thursdays off.

As of guitars right now I own a Fender Deluxe Active Jazz Bass-V, Fender 4-string Percision Bass, Schecter Stiletto active 5-string bass, 60's re-issue Fender Strat and a couple acoustics, bass and guitar. For equipment, whew... I've got a setup for any venue of all shapes and sizes, indoor and outdoor. Two Ampeg bass full stacks, one being a SVT-410HE on top of a SVT-15EN bottom being pushed by an SVT-6 PRO head. The other being an SVT-410HLF on top of an SVT-18HE(18") subwoofer powered by an SVT-5 PRO head with rack effects for tinkering. Then my "stand alone" cabs... an Ampeg SVT810E "fridge", 1971 Ampeg V9 9x10", 1972 Ampeg V4b folded 2x15"(which I sometimes stack the two on their side as one BIG rig for outdoor events), a 1995 Mesa/Boogie 1516b full-range bass cab with a 1984 Mesa/boogie 400+ tube head, then my practice/writing rig is a 450w Ampeg BA210v2 combo. Finally, my guitar amp is a 1985 Ampeg SS140-C full stack. For vocals I own a Shure 55SH Series II "Elvis mic".
I have a nice 2012 Corolla so transportation isn't an issue. I'd like you guys/girls to be somewhat close to my area though if possible.

Thank you for reading and if you need another set of hands pickin' some strings, let me know... You can either call or text me at (909)four 4 three- zero 7 nine 3 or email me on here. Please leave a number in the email though. Have a great one everybody.

*I know an amazing, available drummer as well with professional equipment if needed.*

Everything from Kool & the Gang to Rebelution to Reel Big Fish to Pennywise and all in between.