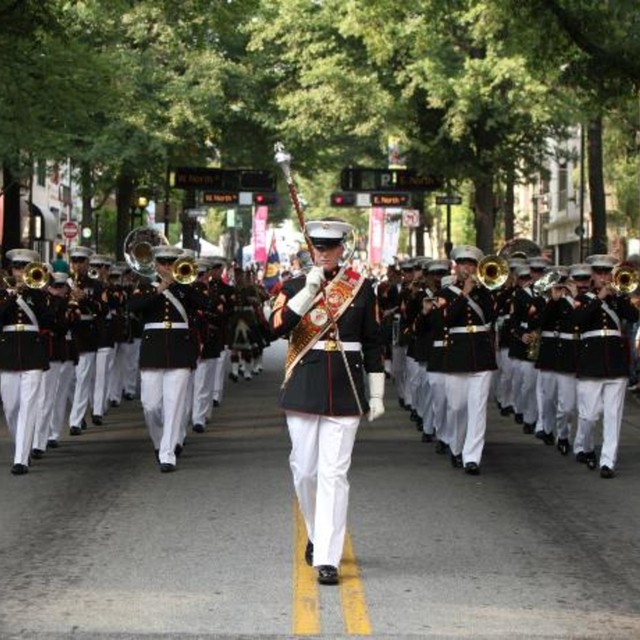 The Musician Enlistment Option Program offers musicians the opportunity to bring their talents to bear in service of their country, to travel while performing domestically and internationally, to earn a free college education, and most importantly to earn the title United States Marine. The program is offered as a four year enlistment which includes formal musical training at the School of Music in Virginia Beach, Va., and assignment to one of 10 field bands around the United States and Okinawa, Japan. Each of the 10 Marine Corps field bands are required to perform as the full spectrum of ensembles to include wind ensemble, ceremonial band, jazz big band, pop rock band, as well as brass and woodwind chamber ensembles. Additionally, applicants may choose to pursue the opportunity to audition for “The Commandant’s Own” Marine Corps Drum & Bugle Corps. “The Commandant’s Own” is the only drum and bugle corps actively serving in the United States military today and affords musicians already familiar with the drum corps concept a path toward serving as Marine Corps musicians.

Upon completion of recruit training at either MCRD Parris Island or MCRC San Diego, Marines report to the School of Music, located in Virginia Beach, Va. There they receive 30 weeks of formal musical training from some of the finest Marine Corps and naval musicians actively serving today. The training involves weekly private instrumental instruction, ear training, as well as music theory. Additionally, Marines are assigned to rehearsal and performance with all of the applicable ensembles from rock band to the entirety of Marine Corps ceremonial performance with the field band and drum major.

With their training complete and graduation from the School of Music behind them, Marines are transferred to their permanent duty stations with one of the 10 Marine Corps field bands. Marine Corps field bands are located along the Atlantic southeast coast, New Orleans, Southern California, Hawaii, and Japan. While serving with their bands, Marines perform throughout the continental United States and travel internationally to locations from Beijing to Sydney to Paris serving as musical ambassadors of the United States Marine Corps. Additionally, the bands are required to maintain regular Marine Corps training standards, as well as ensure their capability to serve as a provisional rifle platoon. When deployed, the bands typically serve as rear area security for the commanding general, but offer opportunities for voluntary individual augmentation to various combat arms units.