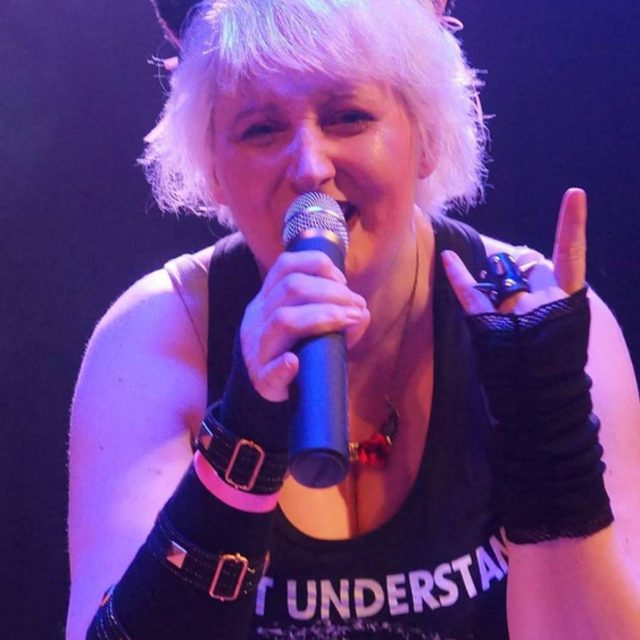 I am the lead singer for The Atomic Cats, a Kansas City based cover band doing a wide range of music from the Bangles to The Outfield to AC/DC. We mix pop, rock, and a dose of heavy metal to give the crowd music to dance and sing to. We believe a band should perform, not just stand and play, so dress and showmanship are important to us, but above all we LOVE music and we want everyone to have FUN!!

I would love to do some Annie Lennox, Depeche Mode, Pretenders, Bonnie Tyler and other 80s standards, but also love new alternative rock as well, and would enjoy doing some of the newer groups out there as well. I would even do some mainstream pop like Pink and even Lady Gaga. I also like blues and jazz, and would like opportunities to do some pieces in the style of Norah Jones or Rikki Lee Jones, but I am open to just about everything but mainstream country. I have performed with madrigal groups at the Renaissance Fairs, and have worked with acapella groups as well.

I would be willing to do voice work for techno/electronic tracks, or provide vocals for songwriters as well. I have recently worked on some indie rock alternative covers for the Shiny Toy Guns. So, my genres are pretty wide open. I would also LOVE to collaborate on any original work, or start a new group.

Here are two websites where you can hear demos of my voice:
://./felinist
://./FelineVocals

I am looking for any projects need female vocals, and The Atomic Cats are seeking a metal style guitarist who can play anything from Blondie to Birthday Massacre or Muse.

My voice is my most important instrument. I have my own mics (corded and wireless), monitor, vocal processor and my flute. I have two electric guitars and one aucoustic, and an Arq but I am still learning.