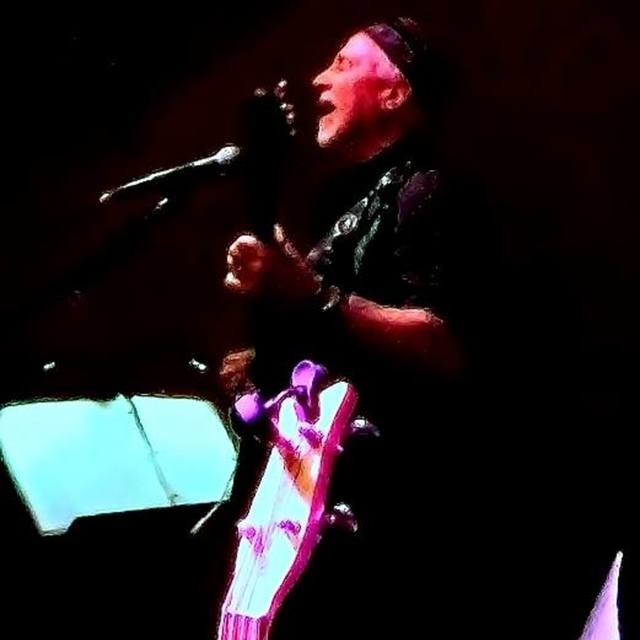 Right now I'm probably too busy to take on serious project, unless.... So please disregard most of the blurb below, starting with the next paragraph. I am not going to erase it because circumstances might change. All that said, I am very interested in jamming and partying with good musicians on weekends. If something clicks, well, that's another story.

Disregrd for the time being: I am currently interested in playing only with serious, skilled, and experienced musicians of professional, tour-worthy calibre. I've paid my dues in the late-night bar circuit and now want mostly to do concerts and party gigs.

I played guitar and handled most of the lead vocals in a great group, the Lone Wolf Trio, which is currently on hiatus. I also play harmonica now and then.

I play all the guitars and lead vocals in the attached recordings, except the second part of the verses in "Sunshine" (which we had never played until that afternoon: hence the mixups). A lot of the recording signal is of bad quality, I know.

Also, I wrote the last two songs and did all the vocals and instruments and the "engineering." One is a reminiscence of the Vietnam era and the other a depiction of an emotional landscape after a fanciful shipwreck on Mars (written in 1997, long before the film, "The Martian"). I've got lots more originals, recorded and not, and in a variety of styles.

Okay, I know that this intro is pretty long, but if you read it you will be able to get a pretty good sense of who I am and what I'd be like as a bandmate.

I see this as a kind of a business -- a fun business, but a business nevertheless. I like my bandmates to be people whom I can think of as my friends, but I also treat them as business partners, with all the respect and consideration for their time that a business relationship implies.

I play lead and rhythm guitars, harmonica, and some keyboard if pressed (pun intended).

I sing lead and backing vocals.

I have a good stage presence.

I play electric and acoustic equally well, both six- and twelve-string, and can solo as an acoustic act, fingerpicking, flat-picking, hybrid picking, and singing. But I am a solid and inventive electric player, too, lead and rhythm. Cell number is two oh three, seven two five, six seven four zero. Or send message to christop dot cole at sbcglobal dot net, no spaces.

I would prefer to work with pretty polished performers, or people who are close to that and aspiring to get there, and who are able to get there without lots of delays and excuses. (I just don't have time for that anymore!) You'd need to be able to handle anything from Stevie Ray to Steely Dan. A little pretentiousness is okay if you can soon live up to the image.

I'd still be interested in mixing it up with other musicians, though, jamming, collaborating on songwriting ventures, and doing studio work. I keep expanding my musical vocabulary. I am always happy to meet good musicians. Say hi, anyway, and maybe jam with me sometime. You never know....

I am a past V.P. of the CT Songwriters Assoc. and have lots of original material, and I am always coming up wth new ideas....

The bands that I've been in have done everything, from Allman to ZZ. We do Sting, Stevie Ray, STP, Steppenwolf, and Steely Dan; Foo Fighters and Little Feat; Tull and Tom Petty; Jane's Addiction, Alice in Chains; Sound Garden, and so on. I have covered the vocals for most everything.

I am fine with any kind of crowd and can shift gears to suit.

It is not necessary, but at some point down the road we could add some original material, if practicable.My performances of my originals have appeared on a number of Connecticut Songwriters’ Association albums. And yes, I love collaborating with other songwriters.

I wrote the last two songs. I write and play in lots of other styles, too. Maybe these two are not the best representations of what can I do, and I don't know how marketable they are. But this is what I have available as MP3s right now. I have lots more that I should add and that exhibit other styles. Both of these songs are on Connecticut Songwriters Association albums. I play all the instruments and sing all the vocals and did the recording in my home studio.

The other recordings are not great quality, I know. They are either from live performances or just crude records of practice sessions. one thing, our harmonies sound much better than this when the mix is right. They are with the band I am in now, the one seeking a keyboardist. Ours just resigned. I sing lead vocal on all of them except for some verses of Sunshine, and I am the only guitarist on this recordings.

"Young and Green" I wrote in 1994. It's about growing up during the Viet Nam War era. The title is an obvious invocation of the poem by Dylan Thomas, but with a twist. I hope it takes you somewhere interesting.

I wrote "Mars to Earth" in April of 1997, while the Voyager probe was about midway to Mars. I imagine what it would be like to have landed on Mars, away from Earth for a minimum of 18 months, given current technologies, and perhaps forever if something went wrong....

My equipment list is subject to occasional changes -- esp. overdrive pedals and acoustic guitars -- but the standards are high and the foundations are well established. The following is what I have at the moment.

ELECTRIC GUITARS
I have done my own electronic customizations on my electric guitars. Each has pickups selected to suit woods and body type. Those with humbuckers have serial / parallel / single coil and phase switching. Vintage Ibanez guitars are perfect platforms for this sort of modding. The results are as good as the best boutique guitars. I use military spec PIO capacitors and other exotic spices and tweaked tube amps to get the savory tones I seek.