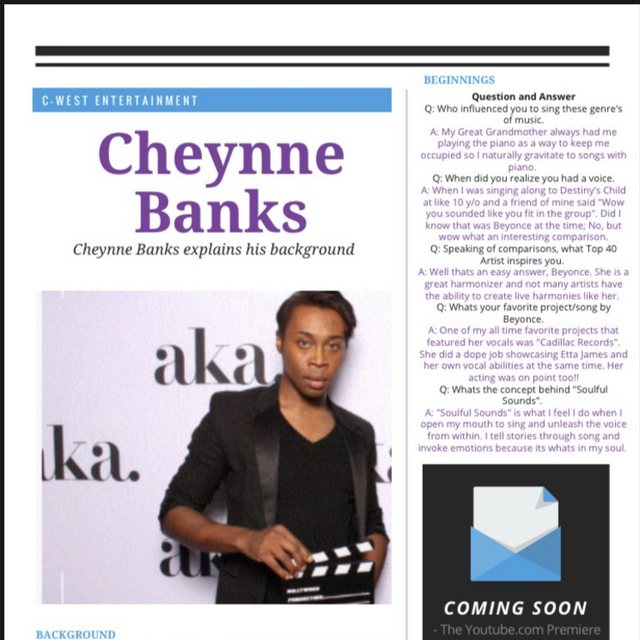 CHEYNNE BANKS: As a singer, dancer, and actor this artist brings the whole package to the stage. Since the age of five he knew in his heart, the stage is where he was meant to be. At a young age he began modeling in such catalogs as JcPenny’s, Sears, and Parenting Magazine. Even through that entertainment outlet that was not enough for this energetic soul. He had a voice and wanted to be heard. So he joined local choirs, youth singing and school choir. During his school’s 1997 Christmas Concert he was featured in The News Journal for his solo of “Oh Holy Night”. He then went on to sing for radio events such as Relay for Life with WMPH 91.7 and “Knight of Talent” with 100.3 the beat in 2006. As 2007 wrapped up he still was missing something in his repertoire of performances, Los Angeles, CA. In 2008 he embarked on an artist’s dream, Hollywood, CA. He then worked on such projects as AFI Thesis Films, a music video Starring Keri Hilson, and local dance/ vocal productions through IDA of Hollywood and Musicians Institute. As he says when he’s onstage “This is my world now! Fasten your seat belts you’re in for a ride”. So welcome!!
./CHEYNNEBANKS2012

Im a vocalist so my voice and my music theory knowledge.