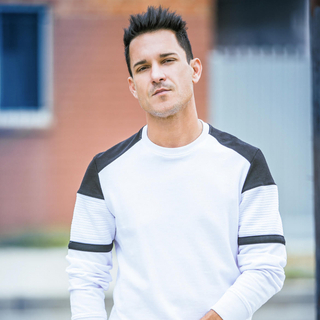 Chris Poulson, an independent songwriter and artist, attracts all eyes to him with his unique music and voice. Drummer from formally signed; Fearless/Reprise (Pop/Rock/Alt) band - Rock Kills Kid, turned singer-songwriter and guitarist.

Some people are just destined to be in the show biz, running front and center, entertaining others, and drowning in the hustle-bustle of the crowd. Music is one medium that lets you open a doorway to connect with millions of billions through relatable words, and a mesmerizing voice. However, sometimes people lack the confidence to follow through with this dream as Chris Poulson did in the initial stages of his music career.

He knew that confidence will be more suppressed with fear, so he took steps one at a time to conquer his fear. At the inception of his entry into the music world, he used drums and played live in many concerts and shows. Gradually, it has brought him enough confidence to be his own frontrunner, and inspire people with his music. From there, he spent a few years mastering the craft of singing and songwriting, and also became the lead singer of a rock band in Los Angeles. When the band parted ways, it was finally time for Chris to shine on his own, and show his hidden talent to the world.

From all the songs he had written over the years, he narrowed them down to his top 6 favorites and spent the next several months finding the right members to complete this vision.

Once the line-up was solid, he contacted a producer/engineer to record a 6-song EP, which would also be labeled his singer-songwriter debut. After playing countless shows in Los Angeles, some of which are opening and/or sharing the stage with national headlining groups/bands such as 10 Years and Veruca Salt. Right before the group&rsquo;s disbandment is when the song &ldquo;Fall into Pieces&rdquo; actually came to life.

He ended up writing two more songs, &ldquo;Break Free&rdquo; and &ldquo;Joyride,&rdquo; to add to the mix, and he hit the recording studio shortly after to start his journey as a solo artist. Putting the sticks down was an important move for him &mdash; not only to show the world what he has to offer as a singer-songwriter and frontman, but to follow what he was put on this Earth to do!

In 2021, he released my debut solo EP &lsquo;Fall into Pieces,&rsquo; featuring the heavy-hitting, emotional, and gripping title track. The single, &ldquo;Fall into Pieces,&rdquo; shows Poulson packing the &ldquo;requisite snarl of the wounded,&rdquo; he explains, which offers equal amounts of emotion-drenched instrumentals and deftly conceptual lyricism. His songs hit the audience hard with the truth, and the lyrics will immerse the listener into an emotional rollercoaster.

Chris hopes to inspire people to follow their dreams and listen to their hearts. Everyone is brought into this world to fulfill a dream, leave behind a legacy, and nobody can shape it better than the person itself. With his musical talent, Chris will deliver this message far and wide. To listen to his music, you can visit his profile here: chris__poulson