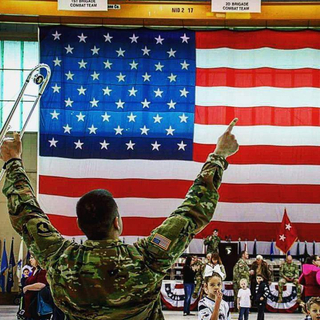 Christian was attracted to music at an early age that he was enrolled at a private music store by his mother Jovita and first learned to played the accordion. Eventually Christian moved onto to the piano and then the French Horn in the 6th grade. It wasn't until one month after starting French Horn that Christian decided to move to Trombone and fell in love with it since he knew it was his calling. This led Christian to study with Tenor Trombonist Dr. Gregory Woll and Bass Trombonist Mr. Roberto Soto. With their knowledge, Christian has gotten the opportunity to perform with "The World Famous" Cabana Boys, Rob Mullins, Bryan Davis, the “Artisan Brass Troupè”, "Paulie Pesh & The Vitals" and many more musicians and bands. Christian has also gotten the opportunity to study with musicians like Andrew Maz, Ricky Minor and Greg Philliganes of American Idol, Ralph Sauer of the Los Angeles Philharmonic, Alex Iles of the Gordon Goodwin Big Phat Band, and Bob Sanders of the Pacific Symphony just to name a few people. After leaving music school, Christian went to studied Video Symphony where he learned the art and skill of Audio Engineering for both Music and Post Production. Christian studied with Michael Verdick, engineer for Madonna and Dale "D-Whiz" Everingham, engineer for Destiny's Child. Christian has already worked on two films as a Dialogue Editor, Re-recording engineer and an ADR Recording Engineer. Along with working with films, Christian has also recorded, edited, mixed and mastered for the duo, Heart First. Christian has also composed, arranged, transcribed, orchestrated and has done copyist work for groups and musicians like Composer Cameron McCloskey, Cerritos College Orchestra, Fullerton College Trombone Choir, and "The World Famous" Cabana Boys just to name a few. Christian currently plays with "Guajira: as the trombone and background vocalist. Christian also served in the United States Army, performing with the 101st Airborne Division (Air Assault) Band where he was given the opportunity to perform for thousands of people. Some of the events Christian performed for while in the U.S. Army was the 101st running of the Indy 500 in Indianapolis, Indiana, the halftime show (twice) for the Tennessee Nashville Titans on Veteran’s Day, and for the Nashville Predators.

Screen name:
Christian Ramirez
Member since:
May 25 2012
Active over 1 month ago
Level of commitment:
Very Committed
Years playing music:
20
Gigs played:
Over 100
Tend to practice:
More than 3 times per week
Available to gig:
2-3 nights a week

I'm also a photographer/cinematographer and can film music videos.