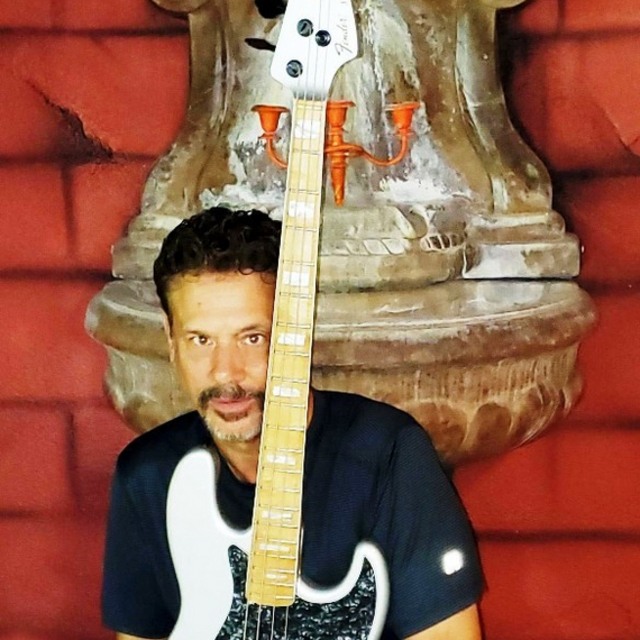 ... !!! HELLO MUSICIANS !!! ... Please check out my videos, photos and history here on this Band Mix. From old to current, some audio (with video slide show) dating back to the 1970's! Bassist versatile in all styles (fretted, fret-less, acoustic basses, 4,5,6,7 string basses) with technical ability and great with harmonies! Very dedicated, team player and easy going! Terrific bass set up and own production. Great at organization and promo.

The videos on the left and photos below (none professionally shot or produced) are just here to show my history. It is meant to give witness that I have been doing this professionally for some time. It's not meant to show where I am going, just to show where I have been. I know there is a lot of Funk and Dance in the videos but I always loved my Rock circuit days and would love going in that direction again but open to any style of working format! :) There are a few videos/music that are Rock mixed in. You do see my back from time to time because I am working computer(s). sound and lighting from stage (+ playing bass, keys and singing).

The top left is when my band was house band at The Karl Reef and was taken somewhere from 2004 to 2006. The top right is semi-recent (Last project, October 2019), and is a phone recording so the quality isn't there, was a brand new band (our 1st recording) and was put together late 2019, but lost our entire calendar to Covid and broke up in early March (2020). Next row down on right is 1989/90 in the Miami/Ft Laud area (live video starts at 20 seconds). Some of these videos (from 1989 on thru 2012) also show my sequencing abilities. On that same row on the left was around 1987 and shot in the Disney resort area of Orlando. The next row down on the left was a live night club recording from a small cassette recorder from 1978/79 of an early Rock band. On that same row on the right is an original piece to show my score work (more original work below that). All instruments were played by myself on all my "Man Cave" originals. The video just below that (NEW-just added) is a jam night I filled in for and is very recent (recorded in 06/2021). Videos below those are through the years I've been playing! Just at random and some just audio with slide show (some pre-VHS video cameras ...LOL!)...

I list below that I want to do 2 to 3 nights a week, but if you are doing more and with a solid calendar I am good with that! What is most important is smiling and having fun while we have a top rated band! :)

Can gig in all styles and forms of Classic Rock, Modern Country, Southern Rock, Pop, Top-40, R&B, Funk ...etc, and can incorporate the right stage attitude and look for all formats. Can do studio work and have done score work in the past and would love to get back into doing film again if you have a project going.

I also mentioned in this Band Mix profile that I play guitar and keyboards. But, I’d rather play those instruments in a show concept where if a keyboard part was needed (a must) for a song entrance in a guitar oriented band or to pick up an acoustic guitar in an unplugged song concept (I also have multiple acoustic basses) and in other applications like that. You can hear me playing those instruments here on my original video pieces (where I played all instruments). Consider me a BASS PLAYER with LOTS OF BENEFITS!

Lots and lots of basses and have sound and lighting production