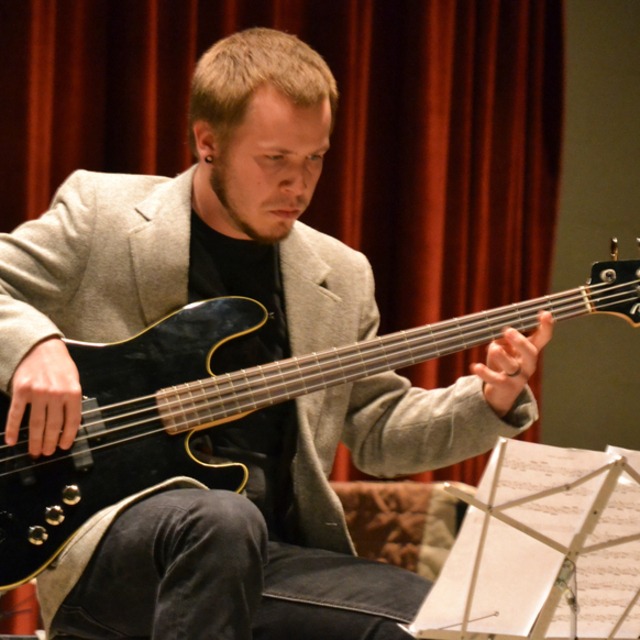 "Clay Johnson, an Ohio native graduated high school in Mountain View, Arkansas, the Folk music capital of the world. Clay studied electric bass guitar in pursuit of a bachelor’s degree in Music Business from the University of Arkansas. He studied under Dr. James Greeson, Claudia Burson, and upright bass under Dr. Michael Montgomery. But he has always enjoyed playing outside of school as opposed to inside a practice room. Clay has played with a variety of different musical groups around the area including: UA Jazz Band, UA Funk ensemble, Jon Shorter band, Tom & Hebron, Rough Draftz, and LaFuSo. Recently Clay has played in a International Blues Challenge contending band "Jigsaw Mud" with Arkansas Blues HOF vocalist“Lectric” Liz Lottmann, Shockolate (a party band whose setlist spans a variety of number one hits through the years). He has also entertained alongside Matt Reeves (son of Country Legend Jack Reeves) and Benjamin Del Shreve. Clay enjoys playing a variety of different genres including Funk, Jazz (including Bebop, bossa nova, swing, blues, Afro-Cuban jazz, and Fusion), progressive rock, Pop, Reggae, and others. He also presents an energetic and unbridled stage presence. Clay’s ultimate goal is to achieve a mastery of the bass in any genre through exploration in any known or unknown style. Music is a great passion of his, and he enjoys sharing it with everyone that cares to slow down and take a listen."

I'm Clay and my problem is bass addiction. Nothing can prepare you for a life of music like playing with other people can. The more I learn the more I realize there is to learn. My goal in any group i'm involved with, is to support the other musicians in the group the best I can, and to make them sound better than they could without me. I do this by laying down a rock solid foundation on which ideas can be built.

Chick Corea is probably my favorite musician of all time. Every group he's ever been in has been the very best of the best, from Miles Davis to Return to Forever. Other Jazzers that influence me are Herbie Hancock, Tony Williams, Stanley Clarke, Al Di Miola, John McLaughlin, Jaco Pastorius, John Pattitucci, The Brecker Brothers, Yellow Jackets, Bela Fleck, Dave Weckl, Horace Silver, and others. I could go on forever naming great jazz musicians that truly inspire me. On the rock side of things, my first love was The Red Hot Chili Peppers. I also like The Mars Volta, Led Zeppelin, King Crimson, Yes, Pink Floyd, Cream, Frank Zappa, Modest Mouse, System of a Down, etc.. Again, I love all kinds of rock bands and to name them all would just be ridiculous. Funk has always been a huge part of my musical journey, Parliament, Sly and The Family Stone, The Commodores, Gladys Night and The Pips, etc. Even though Punk doesn't contain the greatest musicians ever, I still like to listen to the Misfits, The Ramones, The Sex Pistols, Flogging Molly, etc.. I can confidently say that even some 90's gangster rap has influenced my groove, Dr. Dre, Snoop Dogg, NWA. And classic country, Waylon, cash, haggard, George Jones. I truly think that the greatest gift a musician has is his/her ears. Listening to any and all types of music is one of the best practice techniques.

Benjamin Del Shreve's new acoustic album "The Diamond" is coming out soon! And we're playing the entire thing live! Com check us out at George's Majestic Lounge in Fayetteville.