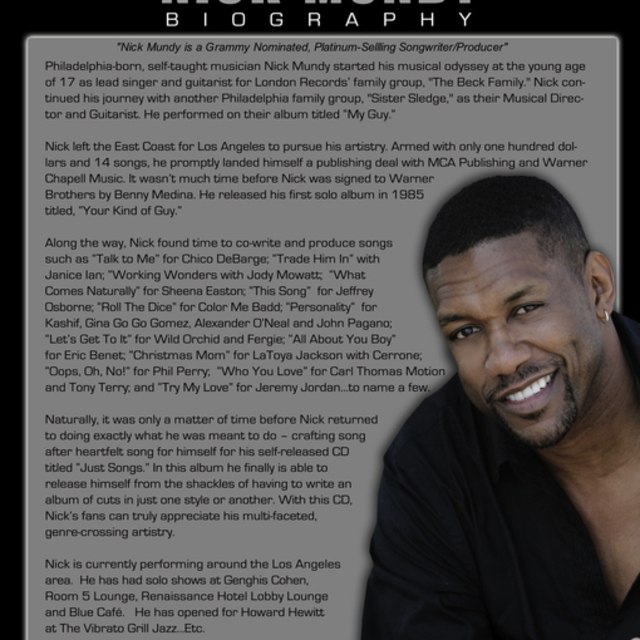 Welcome to Grammy Nominated and Platinum Selling songwriter and Producer Nick Mundys Official Website
Meet Nick Mundy
Philadelphia-born, self-taught musician Nick Mundy started his musical odyssey at the young age of 17 as lead singer and guitarist for London Records’ family group, "The Beck Family." Nick continued his journey with another Philadelphia family group, "Sister Sledge," as their Musical Director and Guitarist. He performed on their album titled “My Guy.”

Nick left the East Coast for Los Angeles to pursue his artistry. Armed with only one hundred dollars and 14 songs, he promptly landed himself a publishing deal with MCA Publishing and Warner Chapell Music. It wasn’t much time before Nick was signed to Warner Brothers by Benny Medina. He released his first solo album in 1985 titled, “Your Kind of Guy.”

Nick is a Grammy Nominated and Platinum Selling songwriter and Producer. He has co-written and produced songs such as “Talk to Me” for Chico DeBarge; “Trade Him In” with Janice Ian; “Working Wonders with Jody Mowatt; “What Comes Naturally” for Sheena Easton; “This Song” for Jeffrey Osborne; “Roll The Dice” for Color Me Badd; “Personality” for Kashif, Gina Go Go Gomez, Alexander O’Neal and John Pagano; “Let’s Get To It” for Wild Orchid and Fergie; “All About You Boy” for Eric Benet; “Christmas Mom” for LaToya Jackson with Cerrone; “Oops, Oh, No!” for Phil Perry; “Who You Love” for Carl Thomas Motion and Tony Terry; and “Try My Love” for Jeremy Jordan… just to name a few.

Naturally, it was only a matter of time before Nick returned to doing exactly what he was meant to do – crafting song after heartfelt song for himself for his self-released CD titled “Just Songs.” In this album he finally is able to release himself from the shackles of having to write an album of cuts in just one style or another. With this CD, Nick’s fans can truly appreciate his multi-faceted, genre-crossing artistry.

Nick is currently performing around the Los Angeles area. He has had solo shows at Genghis Cohen, Room 5 Lounge, Renaissance Hotel Lobby Lounge, Blue Café, The Joint and Charlene's Urban Tapas & Wine. He has opened for Howard Hewitt at The Vibrato Grill Jazz…Etc.