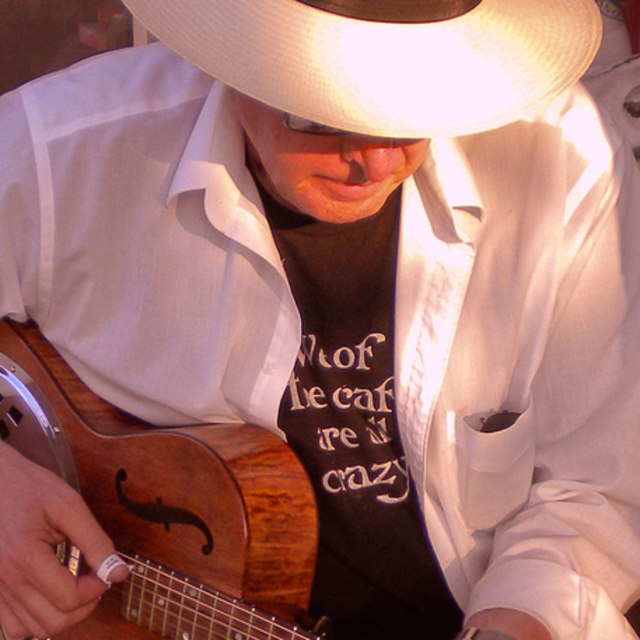 I've been playing guitar in acoustic settings for many years, on and off since I was in college. For the last 4 years, I've partnered with a singer/guitarist and we've played coffee houses and the like pretty steady. But we broke up over her desire to pursue a solo career. So now I'm looking for a partner to practice and perform with.

I've got a pretty eclectic appreciation for all sorts of music, but I limit myself to what I can practically carry off with one guitar and one voice. Influences are everything from Leonard Cohen (Boogie Street really needs two voices) to country to blues, even David Bromberg. I've been listing to music by Terry Gilmore,and Over the Rhine (especially like their song writing). Learned "Vertigo" by Antje Duvecot recently. Just for grins I do "Take me out to the Ballgame" as a blues song. If you want REALLY odd, I do "I'm Looking over my Dead Dog Rover" and "I don't look so good naked anymore", which are decent 3rd set songs if you got a drinking crowd. I write my own songs, which are sliding into a kind of jazz rhythm, but early ones are more "folk" (Boy do I hate that term!)

Well, as I said, I'm looking for a partner, maybe two. Somebody and some instruments to blend into a good sounding and interesting group.I can bring a harp player who also plays stand up bass, and maybe a lead guitarist, but only if we need to add to the sound.

I've accumulated a bunch of PA equipment over the years, all of it works (well, as of last weekend it did), but since it was bought piecemeal, it could be updated into a more compact set of equipment. Got a 8in 2 out Behringer mixer, a couple of pole mounted self powered Behringer speakers, way more that the small houses we've been playing, a couple of Pevey floor monitors, mikes and stands. As I say their best qualities are that they all work and they will all fit in my trunk!