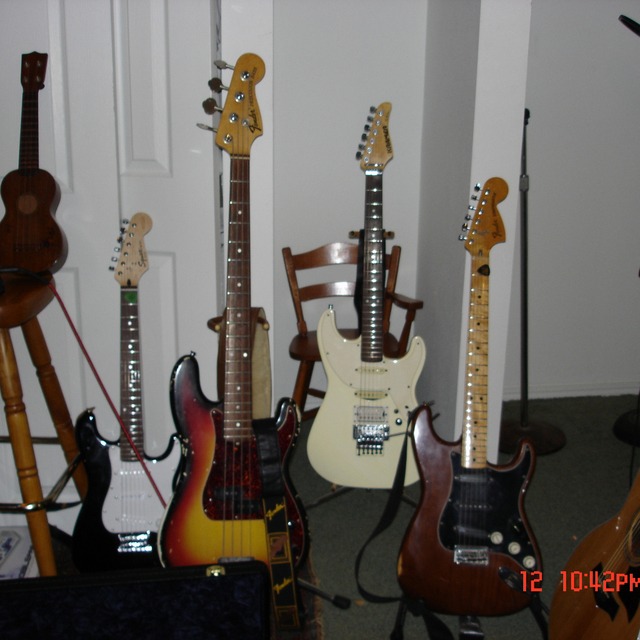 Most of my songs would not down load because files were too big. Check out three songs on my small website: ://dtibbetts2.wixsite/portland-songs. Most people who listen to my songs, jams or noodling around call my sound rock and roll. I actually like to play any kind of music, and would like to learn more styles, always inspired. I am fond of rock/fusion. I listen to Jeff Beck for guitar inspirations, techniques, use of the stratocaster's offerings and bounty of tones. I also like to write my own songs. I write thoughtful lyrics, often I use lyrics in a way to tell stories, commentary, philosophy, culture constructs and I have a good ear for grooves, hooks and inspirations for simple or complex songs, and I always have a few literary tricks for listeners to think about. I play most instruments which are used in rock, R&B, blues, funk, jaz and pop. I can generally figure out how to play the basics for most instruments. I play the bass well, uke, keys, banjo and etc... anything with strings on it. I have excellent equipment, which I have spent several years obtaining. I have excellent fender/American sounds (fender modified amps, boutique amps), and I also have English sounds, (modified Marshall amps). I also have several strats designs, (classic, vintage, modern and modified), a 68 P-bass and Hofner with a red face amp, nice acoustic guitars, banjos, ukes, effects, drums and all sorts of cool stuff needed to record song ideas. I would say that I am an excellent guitarist with a developing sound unique to myself, but inspired by Jeff Beck, Danny Galton and all of the great blues guys. Of course, there are many monster guitarist out there; however, I do have what it takes to deliver with an obvious unique style which is not over the top and can blend in well with a band or a group of musicians. I want to collaborate with others, to write songs. I am good at collaborating, but I also like playing covers, especially if able to arrange them in a different way, if such a desire to do so presents itself. My original songs, which are included, are from 2007. Since then, I have not been that involved with music, for raising kids, focusing on career and etc... did not allow for the time to commit. I am retiring this April, and plan to devote even more time to music next spring, but for now, I would like to find other musicians to put together some sets, record original music and develop working relationships. My skills have increased greatly sense 2007, but at least a quick listen to my home recordings will give you some idea of where my music is coming from.

The music of my generation is obviously an influence. Music played on the radio from the sixties to the 90's invoke memories and experiences, which I like to listen to, play and sound like. My guitar sound is greatly influenced by British guitar slingers, such as Jeff Beck, Clapton, Hendrix, Jimmy Page and etc... However, many blues guitarist from the south also inspire me, and one can notice that when listening to my guitar playing. I have been influenced by song writers such as Neil Finn, Squeeze, Counting Crows, Talking Heads, Allman Brothers, Heart, The Who and ELO, but I would say that I am influenced by a great number of artist.