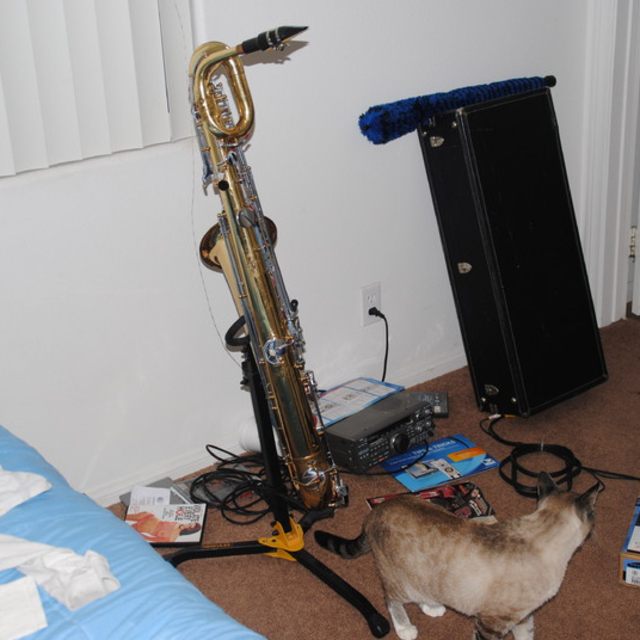 Been in punk rock and experimental bands for many years. Best instrument bass, then rhythm guitar, followed by drums , saxophone and some keys . Been recording on my own for decades, one can hear and see my stuff at s://./user/leviathonus. Into recording environments and incorporating into my music. Ideal situation for me would to hook up with musicians who want to do something unique and highly freeform and experimental.... I am not into sitting by the radio and listening to the trendy alternative rock station and taking notes. Never wasted an afternoon getting high and watching MTV for hours. Not a fan of metal other then early Black Sabbath . Do not worship the Beatles, U2 or Led Zeppelin . Would of rather of seen John Coltrane or one of Tim Buckley's Starsailor tours, the original lineup of Love, the Doors or Jimi Hendrix or an early James Brown show or Otis Redding as opposed to the Beatles or Jefferson Airplane or the Grateful Dead...If I could time travel I would go to a Charlie Parker gig, I would go to the recording session for "I only have eyes for you" by The Flamingos , not to play, but just watch....or hang with Frank Sinatra...you read that right.... I am actually pretty open to a lot of types of music, just as long as there is a level of conviction and dedication to it , played by people who are honest . Yes, have a lot of punk rock experience , nothing I will apologize for, it likely saved my life actually...that said, I still think people should treat each other with respect and kindness. Being a father has turned me around in a lot of ways. I look way and think way younger than I am for one or possibly two reasons, the one certain reason is that I never got into heavy drugs and gave up heavy drinking 21 years ago after former girlfriend essentially partied herself to death. These days, a binge for me is 2 beers . I rarely have more than ONE a week...oh , the other reason why I look and think young, maybe genes ? Regardless , I go out of my way to be positive....hate kills , bitterness kills, it causes cancer.... if you have gotten this far, thank you...and you can check out the music I have made on my own , by myself, if my spare time ://./pages/DARRYL-MONROE/127909540575228?ref=ts , if you would like to talk further, write me at topalstan

Charlie Parker, Sun Ra, TIM BUCKLEY,{experimental period} Chet Baker, Dexter Gordon, John Coltrane {although my chops are nowhere in the same neighborhood, to say the least} Early art punk bands like Wire and the Stranglers.... Yardbirds, Early electric Dylan , Jimi , Thin Lizzy and just about anything R&B from the 70ties back through the 40ties . Whitehouse, Yoko Ono, The Doors, Protopunk and garage rock from the 60ties, early stones, Sex Pistols, Black Flag, DOA, Metal Urbane {band from France} GG ALLIN mid period....I am moved however by just about anything that has passion and feeling and is well executed...Would like to find a partner, or partners who are into some serious give and take and are into trying to form something different....