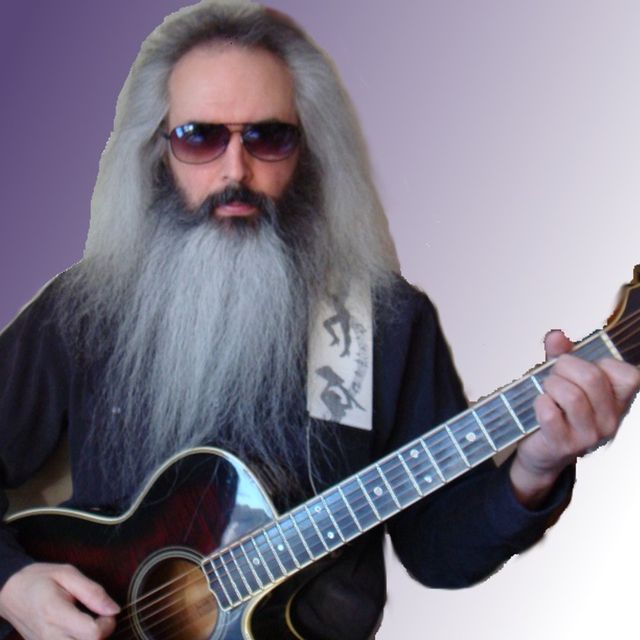 Note: I haven't been on here in years, and in the meantime, I've changed my whole solo show.
I now have incorporated a guitar synthesizer (GR-55) into the show.
This synthesizer actually has 2 separate synthesizers, and a guitar/bass modeling engine PLUS the ability to mix the regular guitar pickups in with all the others!
Before I picked this up, for my solo show, I had perfected a style of playing on an electric/acoustic, where I played bass lines on the E and A strings, which were tuned in C with my thumb, and finger picked chords and played lead line in between chording, all along with a Roland Dr-880 Drum machine.

Well this style fit perfectly when I got this guitar synthesizer, only now, I have REAL modeled bass guitar sounds assigned to the E and A strings Keys, like fender Rhodes assigned to all strings, and flute, sax, or whatever I want on the B and hi E strings which I can control with the expression/volume pedal!

Initially, I planned to put up only live recordings which would show exactly how 'The Dave Hunter One-Man Guitar Synthesizer Band' sounds in a live situation, but when I started recording, I was having so much fun, I started getting carried away, and I decided to see if I could mimic the sounds and recording techniques used on the original records just as a tribute to the great artists, and their recording engineers who made these great songs famous.
These songs are some of my work as of late.

So, as you listen to these demos, you may find it interesting that ALL of these songs,are recorded ENTIRELY on ONE ACOUSTIC/ELECTRIC GUITAR outfitted with the synth pickup!
This includes EVERY single instrument including keys, horns, bass, etc.....All played on the acoustic guitar...Accept for the drums, which I actually play live into the recorder by tapping the pads, and playing the drum machine, a Boss DR-880, just like an instrument.
It helps that I am actually a drummer as well. I could actually play drums in a band with this if needed. It's kind of fun, and the sound is great live too.

Now the acoustic guitar doesn't exactly have the play-ability of a well set up electric that plays like butter, that would normally be required to play Steel Dan licks, or Stevie Ray Vaughan licks, but believe it or not, that's exactly what you're hearing! I'm using this just because I didn't want to mount the midi pick up on any of my vintage player guitars...but I am looking now for a more playable guitar to set this up on now.

Actually, for a band situation, I could add an instant horn section, string section, or what ever, using this guitar synth, or using the T.C. Helicon harmonizer, add an instant back up vocal section. Or I could play bass because the Fender precision bass sounds are excellent on the Roland GR-55 too.

These tools are just amazing, and I must admit, I really liked the challenge of creating all the sound patches, which are all custom made to try to duplicate the sounds of all the instruments used on the originals.

But, although these are all studio recordings, with many extra tracks, the effect when I play live is very similar to these demos....just less soloing. I am able to do lead solos live, but it's in between the chording....Still very effective and full though.
Plus I use a TC Helicon Harmonizer for backing vocal harmonies live as well.

NOTE: Although I do this solo act, I may be still open to other projects.

I have been called a Chameleon of music because of my versatility and ability to play and sing just about any style of music. I have an extremely wide musical vocabulary. Many musicians tell me that I know more songs than any musician they know, and that's probably because I actually have a great respect for nearly all styles and genres of music, and the artists that created that music.

I've been playing for 50 years and throughout that time I've played with bands of every genre you could think of and played thousands of songs of all style during these years.
The demos reflect some of that versatility. Although I haven't put put any country demo songs here, I also really like country and know tons of country songs as well.
NOTE: "In this Place", is actually mislabeled as "Bridge of Sighs" and is an old recording that I just left on here from years ago. I did not use the guitar synth on this one. I just used on Takamine acoustic electric guitar using the playing technique I described above. No bass, just guitar going through a processor, and drum machine.

I may be looking to possibly expand on this concept by adding another musician or two, or a possible band situation.
A bass guitar or synth/keys would be great, and would free me up to be able to solo. Right now I play using a finger style technique, chording while using my thumb to pluck some bass lines, and sneaking in a few short guitar licks in between. (Again More on this below)

And now a shameless plug for the clubs, restaurants, and anyone who was directed to this page that may be interested in booking my solo show.

Seasoned guitarist/vocalist/front-man having played literally THOUSANDS of gigs of ALL kinds, on the East Coast, and the West Coast is now accepting bookings for 'The Dave Hunter One-Man Guitar Synthesizer Band'.

*Restaurants - Clubs - Private Parties -Car & Bike Shows & Rallies*
*Theme parties, or Theme nights at clubs*
Themes like standards, with singers like Sinatra, Dean Martin, Tony Benett, Mathis, & Buble'.
Or Oldies 50s, and 60's Theme Parties, & Country, Or 70s, 80s, & classic rock Theme Parties.
Whatever the venue, whatever the style music, from a mellow dinner set (jazz instrumentals, standards, 50s, 60s, etc.) to Rock, Blues, & Country for a lively pub crowd, 'The Dave Hunter One-Man Guitar Synthesizer Band' will keep you entertained with music for all occasions and any crowd!
Whether it's an easy listening crowd, or a rowdier rock crowd that wants to dance the night away, The Dave Hunter One-Man Crazy Acoustic Guitar & Beat Box Band is the perfect Pub Show where space may be limited, but the crowd demands more than just your average solo acoustic act!
Also great for happy hour/Patio gigs, as well as private indoor cocktail parties, or outdoor beer bashes, Dave Hunter has the experience to play music of ANY genre, ALL DAY OR NIGHT!

If these particular songs do not reflect the music you need for your event, drop me a line at the address below for a sample of the genre you require.
CONTACT: davidhuntermusicmanproductions at gmxxl dot com

I'm from the old school of entertainers who taught me that my job is to make sure the audience is entertained no matter if you're having a bad day, the equipment isn't working perfectly, or whatever, the audience doesn't need to know. You just step up your performance and they won't know if anything went wrong.

I am a professional veteran musician from the hotel/resort show band era and worked with all the top agents of the day (Archie D'amato, Fred Grey, Paul Landerman, Complex 4, Johnny Paris, Bill Luthe and others)

These agents would book me and my band 6 or 7 nights a week for a 2 to 3 week stint at each hotel in the circuit up and down the east coast. Of course there was a couple months down time every year when I had my own local rock, country and blues, and top 40 bands.

Anything from rock (new & old) to jazzy funky latin tinged groove, to acoustic, blues, soul, country and Mo-Town! From Sinatra, Tony Bennet and Buble' to Aerosmith to ZZ Top, as well as Simon & Garfunkel, the Beatles, Steve Miller, CCR...Allman Bros, well...any 50's, 60s, 70's, 80's stuff, any country new or old (Lately been into The Zac Brown Band, Jason Aldean, Toby Kieth, Blake Sheldon , Dierks Bently and the like, and I even do a Motown acoustic set as well (Let's get it on, Smokey songs, etc...acoustic!) and I've been writing quite a bit as well. My originals are a kind of Blues-rock tinged country kind of style. (See Ain't Gonna Let It Go)

I literally know thousands of songs of all genres, and I'm just as believable and content crooning standards as rocking rockers, or doing country, or southern & blues.
I'll play anything as long as it's done really well, and there's a market for it that pays well.

Also, a really good trio with Bass/vocals, and drums/vocals also interests me as a good duo or trio can make serious bucks, but would consider any established corporate function/wedding, or any band positioned to make adequate money.

My influences are wide and varied as a multi instrumentalist and vocalist.
As a guitarist influences range from Jimmi Hendrix, to George Benson, Carlos Santana, Chet Atkins, Skynyrd, Allman Bros, Buddy Guy, Steely Dan, Jimmy Page, Eric Clapton, Stevie Ray, Joe Pass, Wes Montgomery, Robin Trower and on, and on. I also studied the work of sax players such as Tom Scott, and Gato Barberieri, and others to learn to solo more melodically.
Also, I've been really into this guy I found on be!
Really! This guy plays solo classical guitar Brazilian style latin jazz covers of almost any song imaginable. He puts his own style and twist on them all, and he's very entertaining to watch. Check him out. His name is Naudo.
Any guitarist is sure to pick up licks and inspiration from watching this guy.

As a vocalist, I went through many different periods when I would study the styles of many different singers such as: Stevie wonder, Steven Tyler, Steve Perry, Paul Simon, Tony Bennet, Sinatra, Michael Buble, Huey Lewis, J.J. Jackson, Smokey, Tom Jones, Johnny Mathis, Jeffery Osborne, Van Morrison, Robert Plant, Niel Diamond, I love The Fabulous Thunderbirds, and Greg Alman, John Hiatt and since I started in music with oldies and country, Kenny Rogers, Alan Jackson, Toby Keith, and many of the new artists and all the old time country artists as well as the great oldies singers like The Platters, Nat King Cole, Gene Pitney, Elvis, Ray Charles, and so, so many others.
Actually, I would have to say that I was influenced in some way by every artist I've ever heard. Either by hearing something they did that I liked, and tried to incorporate that into my style, or something that I didn't like, and made sure I didn't do the same.
I also have been digging playing Brazilian latin finger style jazz with a contemporary groove-funk twist, on my classical guitar, and have written about 8 Instrumentals in that style.
I can finger pick classical, and acoustic guitar but also enjoy ripping a good fiery flat picking rock or country solo as well.
As a drummer, I studied the styles of drummers like Harvey Mason. David Garribaldi Tower Of Power), Tony Williams, Billy Cobham, Alan White, Carl Emerson, Bill Bruford, etc

I've got tons of gear, P.A. (Klipsch, JBL, EV, QSC , several systems for different size venues) lots of mics (vintage Sennhieser 431 (my personal favorite), shure, EV, Takamine and Ibanez acoustics and classical guitars, several vintage Les Pauls, a Fender Eric Clapton Signature model Strat, 70s Fender Precision bass, Vintage Ludwig drums, and a Fender Rhodes, and assorted synths (can play small parts on keys if I had to with some work on my part, but haven't played them in years) (Mostly used for recording) Lots of processors, Lexicon etc, mixing boards and a few digital multi trackers.
I am also quite proficient with sound gear, and running sound and recording.

Now...If you read this entire bio, well then you've got more patience then I do! lol!
And, the sad part is that I left half of it out!!!