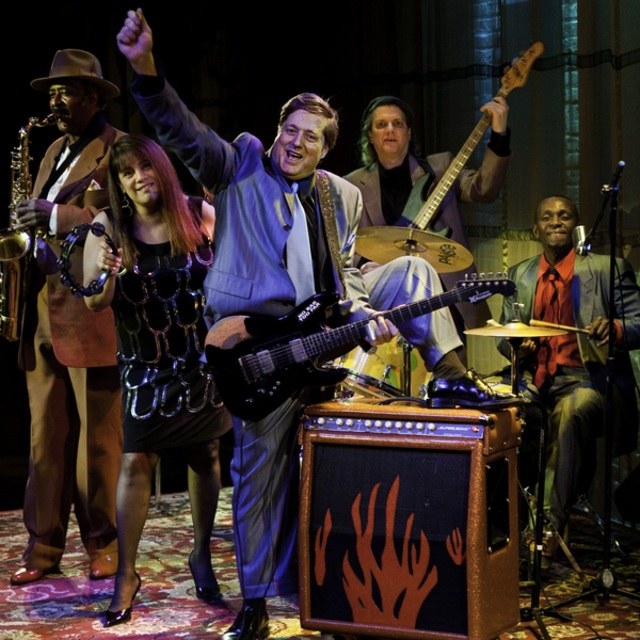 Dave Weld born in Chicago, he was first influenced as a child when he found an old Victrola in the basement and wore out the blues 78's. He moved to New Mexico, and studied guitar under Kurt Black, a jazz player who worked with Benny Carter, Grant in the NY jazz scene. Dave also met and jammed with Gatemouth Brown. Weld drawn back to Chicago after hearing Howlin Wolf on the radio and found that he was welcome on the West side of Chicago (black hood). He started sitting in at clubs and landed a gig with Hound Dog Taylor's band, Brewer Phillips,Ted Harvey, at Sweet Peas on 43rd St. Philips and Harvey had been working with JB Hutto after Hound Dog's death, and came back to Chicago after breaking off with JB in Boston. Weld then moved on to the 1815 Club on W. Roosevelt, which was owned and operated by Eddie Shaw who had Howlin Wolf's band, the Wolf Pack. Dave stayed there and played in the band with Chico Chism, Lafayette Gilbert, Hubert Sumlin, Detroit Junior, and Eddie Shaw. Dave played with Otis Rush, Maxwell St. Jimmy, Guitar Junior, Jew Town Burks, Doug Macdonald, Boston Blackie, Tail Dragger, Little Wolf, Big Bad Ben, Little Aurthur, Johnny Littlejohn and more. During this time Weld was under tutelage from JB Hutto, a Grammy awarded Blues Hall of Fame slide man from Georgia. He studied at JB's house and met Lil' Ed, and they started the Blues Imperials". Bruce Igauer from Alligator recorded them in a historic session "Roughousin'" and they started world tours. Dave started "Dave Weld and the Imperial Flames" in 1988 and they came out with their first CD "Roughrockin' in Chicago", on Parsifal Records in Belgium, the second time they recorded for Earwig Music, "Keep on Walkin'", and the band again went overseas. The current band is Abb Locke, legndary sax man, Jeff Taylor, Monica (Garcia) Myhre and Dave Kaye who is now signed with Delmark Records with a new CD "Burnin Love".

Abb Locke is one of the most legendary saxmen of the blues, born in Cottonplant, Arkansas. Picked cotton as a young boy but had a dream to play the sax. He struggled throughout his childhood, living on his own and working his way to fullfill his dream. He came from the cotton fields to Carnegie Hall. This came true when he played with Albert Collins. He has recorded and worked with Buddy Guy (see the Chess box set), Willie Mabon. Earl Hooker, Albert Collins, Koko Taylor, Magic Sam, Eddie Clearwater, Lonnie Brooks, Muddy Waters, Elmore James, Howlin Wolf (three or four years in the band and Abb is featured in Wolf's new biography), the Rolling Stones, and many more.

Jeff Taylor (Drums/Vocals)is well known and well respected. Born in 1960 in Chicago, IL. They say he came out singin'. At 11 he joined the "Little Angels" group to sing and after that he sang and played drums for Top Hat, who vouched for Jeff to get him into clubs to work at that young age, and they worked the South and West side of Chicago, and had a standing job at The Sabre Room, where Jeff met and played with Dizzy Gilespie, Cab Caloway, Frank Sinatra, Dean Martin, Count Basie and Tony Bennet. He then freelanced strating with Smilin Bobby, Tyrone Davis, the Dells, the Chilites, Lonnie Brooks, AC Reed, Eddy Clearwater, Artie White, Junior Wells, and more. Jef and Dave do a duo where Jeff sings the bass lines so they can sound like a three piece band. He was with the band for four years then joined the Rythm and Blues Kings for three, then back with Dave for six years.

Monica Garcia (Mona Rose) Musician (Vocalist/piano/harp) songwriter, learned to sing and dance as a child performer in the Hidalgo Club in Rockford, IL from the age of six through her teens, backing up stars from Mexico, and fronting local jazz musicians. Her family training, church chior, led her to numerous bands from Mexican, R&B, Funk, Rock and Blues. She was a member of very active in the Blues community giving. Among the co-founders of the Blues in The Schools program in Rockford, organizing several benefits for musicians and families. She was a vocalist/piano with the group Art Attack, 2001 Rami winner for Funk/R&B. Met Dave Weld in 2002 and formed a friendship which lead to her singing the blues with his band. Co-writing many songs with Dave Weld and became known for her originals, "Listen to Mama", "Talk Dirty" or classic blues. Completing the band package with diva blues and harmony.

Happy Pre-New Year's Eve at Chrisy's! Come on down and bring in the New Year early!

Come on down to one of the best restaurants in Gurnee! We're gonna party all night so bring your dancing shoes.

Great to be back at the Galena Brewery! Come on down for nothing but the blues!

Hey it's party time at Freeport's one and only Christy's! Come on down and bring your dancing shoes!

First Annual Event at Spreckers of Madison! Sprecher's famous for the best root beer in Wisconsin! We are gonna throw down like never before.

Come on down for the best root beer in the world and the first annual Mini Blue Festival! We are gonna throw down like never before, so you've gotta be there!

Great to be back at the Skinny Dip Inn. We are gonna throw down all night long.

Great to be at LaGrange's Annual Jazz and Blues Festival! We hit the stage at 9 and plan on giving the best show ever!

We're back in Rockford and hoping to see all our friends and fans! Come on down and bring your dancing shoes.

This is going to be the party of the year!! Two bands rain or shine!

Great to be back at the famous Buddy Guy's Legends. Come on down for a great evening of blues.

The best beach in the area, come on down and bring your dancing shoes!!

Great to be in Chicago and it gonna be a party all night long!!

We are so glad to be back at Stevens! Come on down for a night of the blues.

We're back at Buddy Guy's Legends and have a great show outlined for you! Come on down say hi to Buddy and spend the evening enjoying some of the best food in Chicago, legendary decor, great sound room and some of the best blues acts in the world!

Great to be back at Kelly's, our favorite hometown bar!

This year's party is gonna be bigger and better than ever! This is the party that all of Oregon talks about.

We are headlining this year at the McHenry Blues and BBQ! Come on down for a full day of blues. This is a festival that you want to be at. Lots of food, music and fun..

We are so glad to be back at Christy's! Some of our best friends are there and we're gonna make is a party all night long!

Bikers welcome always to the Two Wheel Inn! We are gonna lay it down all night long...

Come on down to Chicago's best seafood restaurant for a night of blues...

If you haven't been invited, your gonna miss a hell of a party. Email us and we'll be happy to add you to the list if your in the area! The annual block party that brings food, drinks, music, dancing and nothing but fun!!!

Great place for a Sunday afternoon of blues!!

Great to be back at the Blackhawk! It's gonna be a party all nigh long!

Happy Reunion! We welcome everyone back for their class reunion and plan on a great night of entertainment!

Come on down for the first Field of Blues Festival for Rockford, IL . Make this an annual tradition and come out to Aviator's Stadium and enjoy the blues!

We're so happy to be back at the famous Chicago Blues Fest! We are ready to throw down like never before.!!