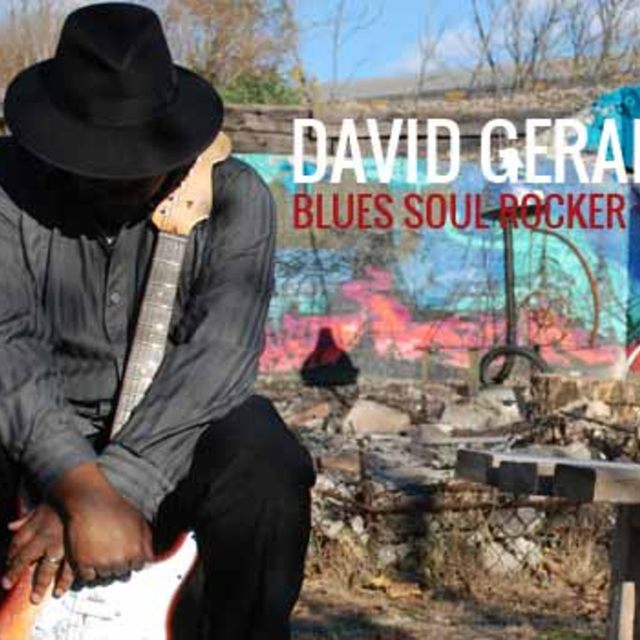 David Gerald, the son of Rural Mississippi born and raised parents, grew up to the sounds of the blues and R&B music in his hometown, Detroit. He's the youngest of 11 children, 6 of whom were born and partly raised in Mississippi. "Because segregation and racial discrimination were so bad in Mississippi at the time, my dad moved the family north to Detroit when he was 33, so we'd have a better chance at the American dream.

Gerald started playing guitar at the age of 15, influenced by Prince and 80's rock guitarists. He rediscovered the blues and listened to the music of Albert King, ZZ Hill, B.B. King, and Stevie Ray Vaughan, to name just a few.

"I was lucky enough to have a neighbor who was a guitarist and gave me scrap guitars. I would piece them together and build 'Frankenstein' guitars," says Gerald. "They were horrible to play and sounded bad, but I had to play music. It was and is my destiny. I finally scraped up enough money to buy an old amp and I was happy."

Gerald performed in many local blues, R&B, and rock bands cutting his guitar and vocal chops live and in person. Finding it hard to keep a band together, Gerald learned to play guitar, bass, keys, and drums. Using two antiquated cassette recorders he would overdub each part individually until the song was complete. "The end result sounded horrible, and the songs would not end up in the same key they started in. But it got my songs recorded," says Gerald. This was the beginning of his songwriting, most of which were pop and rock tunes during the 80's. Around the age of 24, he began experimenting with computers to write and compose music, which he has done to this day.

Now in his 40's, Gerald is playing nationally with his own band. Year round, he performs at clubs and festivals across the United States. Some notable appearances include: Riverdays Festival (formerly known as the International Freedom Festival) in Detroit, MI; Chrysler Arts, Beats and Eats in Royal Oak, MI. Springing The Blues Festival in Jacksonville, FL among many others.

Gerald's blues have been receiving widespread radio play, along with recognition in the Blues and Rock communities. Recently Gerald was listed as #1 on the ReverbNation blues charts for Michigan Blues artists. His debut album "Hell and Back" reached #1 on Roots Music Report's Blues Chart for Michigan based artists and remained in the top 20 for many weeks in a row.

Gerald's follow up album 'Blues Soul Rocker' is slated to be released in the Winter of 2016. It will contain ten tracks of Blues infused Soul Rock. It is very anticipated by his supporters and music media alike. Gerald is looking forward to introducing his new music to them. He is also excited that he will get to share his experience with new supporters as well.