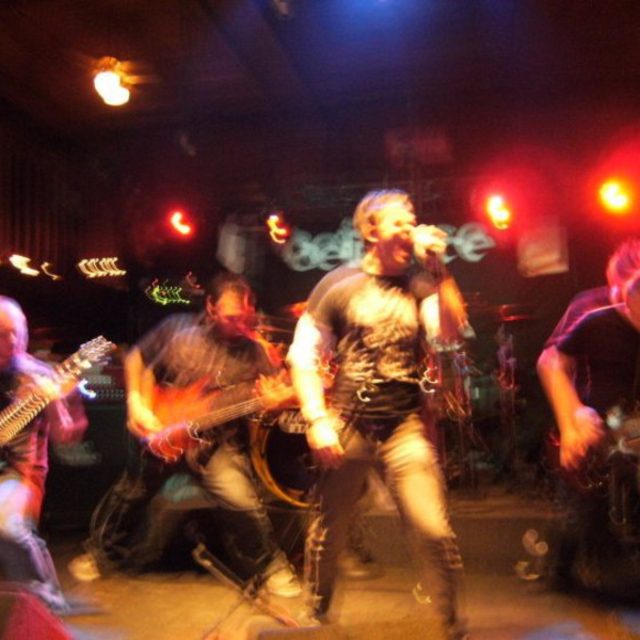 Defiance Pointe is a 5-piece modern rock band, hailing from the outskirts of Saint Louis, Missouri. Originally formed in 2004, the band centers around childhood friends Jacob Woodworth (rhythm guitar) and James "Jimbo" Ballesteros (bass, backing vocals). The band is known for their brand of powerful, melodic rock music coupled with a high-energy stage show, and has established fanbases both in their hometown of St. Louis and in their "second home" of Battle Creek, Michigan.

THE LIVE EXPERIENCE Staples at Defiance Pointe shows include the ubiquitous DP circle logo, a throng of fans clad in black T-shirts with various (often homemade) printed designs, frequent calls to "Get some drinks in!" and an overall light-spirited party atmosphere. Over the past 5 years, a devoted group of die-hard Defiance Pointe fans from both cities have begun to travel alongside the band, frequently making the 17-hour round trip in the span of a weekend. In recognition of these fans' dedication, the band members have been known to give away free tickets, merchandise, drinks, or a place to crash for the night.

2009: UNTIL THE DAWN Several years in the making, the quintet's full-length studio debut Until the Dawn highlights 11 fan favorites from the band's five-year repertoire of over 30 unrecorded songs. Until the Dawn was released at Pop's in Sauget, Illinois on March 7th, 2009. The album showcases Defiance Pointe's signature riff-heavy rock grooves and soulful, long-note melodies, spanning the range from brooding acoustic ballads to driving, fist-pumping anthems. There is even a hint of flamenco thrown in for good measure. And of course, a couple of self-proclaimed "drinking songs" that have become a mainstay in the DP lexicon. The album is laced with no shortage of talent, and provides more than the occasional guitar solo.

Positive reactions to Until the Dawn fueled the group's momentum, and Defiance Pointe found themselves splitting shows between hometowns on a near-weekly basis. Defiance Pointe's fanbase continued to grow; however, the strain of splitting time between St. Louis and Michigan led to an impasse within the band, and in the span of a year, resulted in the departure of all but Jake and Jimbo. The two friends wasted no time in recruiting new full-time members, welcoming Sean Jones (lead guitar), Len Kiraly (drums), and Baines Johnson (lead vocals).

Defiance Pointe is a 5-year veteran of the St. Louis rock scene. We've seen a lot change, and now that we're starting to book more out-of-town and national shows, it looks like we're changing too. Growing up is hard.... and for us that means having to fill two very important sets of shoes.
That said, we're not looking for just anybody, we need the right people so we can have the best chance to succeed. Influences include:

Basically, a combination of chunky riffs, fast beats, cool licks and sing-a-long choruses with some odd time-signatures and shredding guitar solos thrown in to taste. We just finished recording a 4-song EP which features our more refined modern sound. If you ask really nicely, we can send you some clips. We think it's good stuff.

Think you're up for the challenge?
If you are all of the following:

-Over 21, Under 30
-Committed, motivated, and goal-driven
-Easygoing and drug-free
-Not a felon (sad that I have to ask)
-Able to rehearse two nights a week downtown
-Able to sell tickets and promote the band (another two nights a week)
-Well-adjusted to a musician's lifestyle
-Using Professional wireless gear with road cases

.... then you just might be! This is a solid, steady, PAYING gig if you can commit to it. So if you're interested, please send a quick bio with a list of your previous bands/touring experience and a link to your /be/ so we can see and hear what you have to offer. If we like what we see, we'll get in touch.

PS --- PLEASE double-check and make sure you fit our criteria before responding. Thanks again!