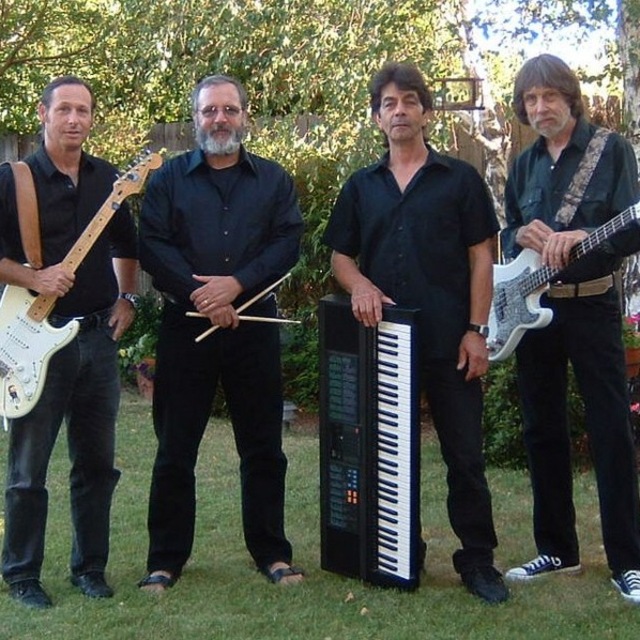 Since 2003, this professional Elk Grove-based band has performed some of the best Classic Blues, R&B, Country and Rock in Northern California. The Detours emphasizes driving beats, melodic music, tight harmonies and popular songs sure to keep the crowd dancing AND still able to hold a conversation. Their more refined sound attracts an audience that appreciates music over noise. The Detours' performances are augmented by professional sound and light systems suitable for any venue. Professional presence, great dance music and exceptional talent! What more could you want in a live-band? And now The Detours offer their "Live-Music-Plus-DJ-Service" which allows you to design the music for your event exactly the way you want!

Don Verrett - Keys, guitar, harmonica, vocals
Born in Louisiana of French and Cherokee heritage, Don was influenced at an early age by lively Zydeco music from artists such as Doug Kershaw and Queen Ida. Later as a boy growing up in San Francisco it was hard not to play music. His father Al formed a band with Don’s uncles. Their constant rehearsals and joy of making music left him with an impression that will last forever.

Don has enjoyed singing and playing music with a variety of bands over the years. He has had the opportunity to back such vocal groups as The Whispers and The Natural Four. His bands have opened for Tower of Power and The Serendipity Singers. He has worked in bands with Lydia Penz of Cold Blood and Tom Poole of The Tommy Castro Band.

Following in his father’s footsteps, Don later formed a band under the name “Our Father’s Sons” with his three brothers. Together they toured the states of Hawaii, Oregon, Nevada and Alaska.

Currently Don is singing, playing keyboards, guitar, saxophone and the occasional harmonica with the Detours. His Love of music is infectious and continues to give him pleasure.

Born and raised in Detroit. The Motown sound was a strong Influence from an early age. Diana Ross & The Supremes, The Temptations, Funk Brothers’ instrumentals. Inspired by jazz greats at Baker’s Keyboard Lounge. Played percussion in concert and marching band from age 9 through HS. After hearing Django Reinhardt records he made the decision to become a respectable jazz guitarist. Still working on that.

Returned to USA in 1990. Involved in Sacramento Traditional Jazz Society. Teaches guitar p/t at A Wonderful World of Music in Elk Grove since 1998. Loves reconnecting with the music he grew up with since joining the Detours in 2004. Playing with these guys is a blast!

The driving beat behind The Detours! Jerry was born in New Jersey in the 50's and still plays on the Slingerlands he bought there in the 70's. His early drumming was influenced by the eclectic styles of the greater NYC area and his multi-generational music-loving family. His rythmic roots were formed by performing in rock, motown, r&b, swing and blues bands. Jerry's musical trip has taken him from New Jersey to Pennsylvania to Washington DC to Oklahoma to California - backing some fine musical talent while polishing his stick-licks along the way. Come dance to the dynamic stylings of this seasoned professional percussionist!

John Livingston Tunison IV currently holds-down the bass position with The Detours. He is a founding member of the "cult group" Highway Robbery. Their album, produced by Bill Halverson (Hendrix, Cream, CSN&Y) for RCA in the 70's, is now recognized as a cult-classic reaching a global audience.

John was a member of the "studio elite" for years in L.A. and is a multi-instrumentalist and vocalist with a long list of credits which include 6 CD's along with countless tours and gigs throughout the country.

John appreciates The Detours because, like himself, they play a variety of crowd-pleasing styles which please many different kinds of audiences on various levels.