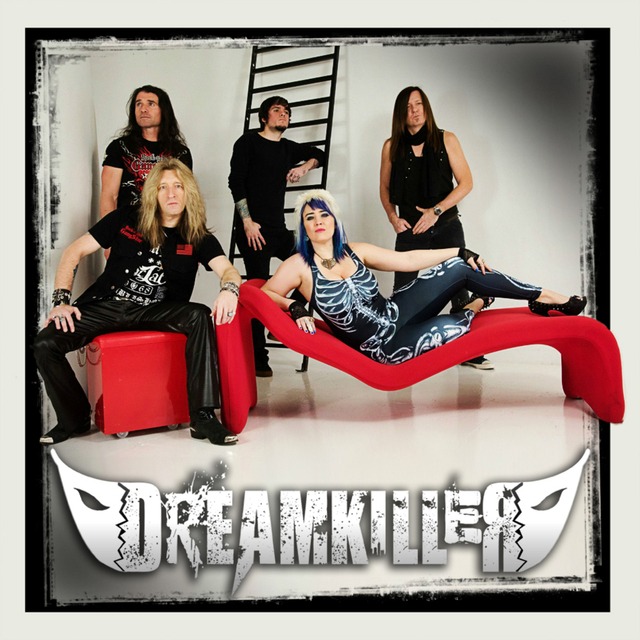 DREAMKILLER is a nationally touring melodic hard rock band that presents elements of soulful melodies, jazzy harmonies, catchy rock hooks and prides themselves on colorful lyrics that include positive themes of strength, perseverance, conquering your fears head-on, as well as pushing with no limits to accomplish your goals.

The band was founded in 2004 by Greensboro, NC native and triple threat, Christy Johnson, [2010 Los Angeles Music Awards NATIONAL FEMALE VOCAL PERFORMER OF THE YEAR; 2013 International Music & Entertainment Awards ROCK FEMALE VOCALIST OF THE YEAR] who has been featured in such films as "Tobe Hooper's Mortuary", "National Lampoon's Pucked", and is starring as Judy Hartley in the upcoming re-imagining, "Night of The Living Dead: Genesis". Involved in arts her entire life, Christy holds a MA and BA in Acting. On lead guitar and backing vocals is seasoned industry veteran, Scott LaFlamme, of Springfield, MA. Scott is most known for his work as the lead guitarist for national act, "Bang Tango", with whom he toured from 2010 – 2014, as well as "Randy Rhoads Remembered" tribute events. Touring extensively for over 20 years, and praised for his extensive knowledge of intricate musical theory, Scott spearheads LMI Studio (LaFlamme Music Instruction), where he educates students in technique and theory for guitar, bass, keyboards, drums, vocals and songwriting. He is endorsed by InTune Guitar Picks, Gibson & Spector Guitars, D’Addario Strings, Flying V Leather Accessories, and Rock N’ Roll Gangstar Clothing. Chaise Elliott is a veteran of the Memphis, TN hard rock and metal music scene. With over 14 years of experience on guitar and bass, he is a multi-talented asset to Dreamkiller. On bass and backing vocals is Jason Cornwell (Boston Bassman), who is most known for playing in "Mr. Big’s Eric Martin" as well as countless tours with bands such as "Dokken". He is currently endorsed by Brubaker Basses, SIT Strings, Ernie Ball, Vivid Amps, and most recently EBS Professional Bass Equipment. Derrick Pontier from Huntington Beach, CA is a world touring drummer who is most known for playing with Great White, Jack Russell’s Great White, C.C. Deville’s Samantha 7, and Stryper’s Oz Fox. Playing drums for over 30 years, he has toured the USA, Canada, Europe, Japan, Singapore and more.

Dreamkiller is also proudly sponsored by COLDCOCK Whiskey and Curt Mangan Strings. They have shared the stage with such notable acts as Lacuna Coil, Gemini Syndrome, Zach Myers of Shinedown, In This Moment, Saliva, Upon A Burning Body, 12 Stones, Mushroomhead, Butcher Babies, Candlebox, Eve To Adam, Straight Line Stitch and many more.

Music from Dreamkiller has received placement in 12 different films so far, many of which have been released worldwide and have won numerous awards. Notably, their track "Lyrik's Battle" was named as #7 of the Top 10 Most Requested Tracks of 2012 on the nationally syndicated FM/internet broadcast Rock Solid Pressure Show. Along with receiving a plethora of accolades, they have played the main stage of Rockapalooza, Megaton, KOHL Fest, performed at the Vans Warped Tour, SXSW & Heart of Texas Music Festival, showcased at numerous music conferences and tour nationally in support of their full-length concept album "Sleepless Dreams". They have also released singles "Absolution" [currently being utilized in "Monster Jam" experiences globally] and "Love vs. Dreams" [accepted for inclusion on the soundtrack for “Night of The Living Dead: Genesis”] that were mixed by Grammy award winning producer, Toby Wright. Dreamkiller is currently working on their second full length concept album, entitled "11:11". With numerous U.S. national tours under their belt, they look towards the future with aspirations to span their travel worldwide.