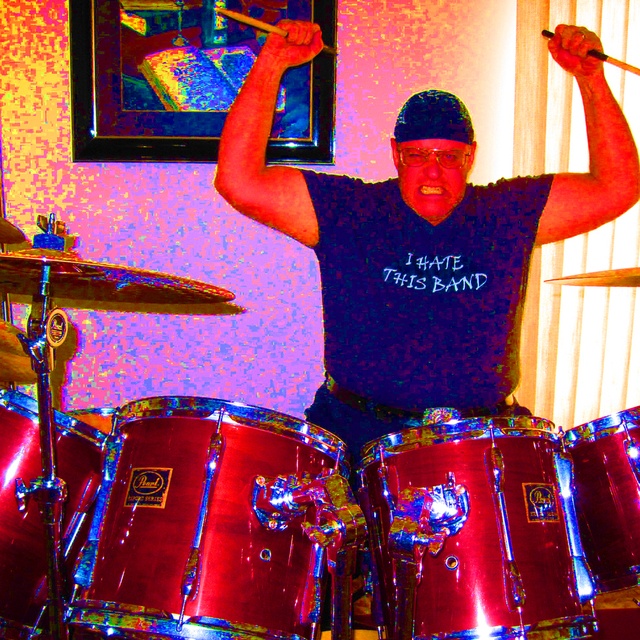 In 1965, when Martin was 8 years old, he began tapping along to a Dave Brubeck album, and it lit a fire in his soul that changed his life forever. As a teen, he was part of the opening act for Brubeck and Maynard Ferguson, and also played many concerts, parties and wedding receptions in the suburbs of Detroit, Michigan. Martin moved to California in 1976, and in addition to playing in numerous bands around the San Francisco Bay Area, he was also part owner of a small recording studio in Redwood City. Martin moved to the Redding area in 2000, and began gigging steadily with several local area bands, and co-founded the Dan Frost Confluence. Martin built a rehearsal & recording studio on his property, and began providing drum set instruction for beginning and intermediate students. He founded Clownbreath Productions in 2003, specializing in audio recording, graphic arts and promotion.
Family concerns led him to give up his home, his connections and his careers in California, and relocate back to Michigan in early 2008. He is already gigging on a regular basis, and currently working diligently toward rebuilding his empire.
As a drum instructor, Martin's syllabus incorporates the following elements: individual student evaluation; basic hand and foot technique, including drum rudiments, Stick Control, the Moeller Method and other fundamentals; reading drum charts; proper practice methods; helpful learning and study techniques; concepts of rhythm, tempo, dynamics, time signatures, context, and keeping time with a metronome and with other musicians; proper set-up, tuning and care for all drums, cymbals and hardware; variations of sticking and striking techniques on drums and cymbals; grooves of all types, from simple to advanced, focusing on development of coordination, independence and interdependence; fills, their purpose and how to incorporate them into a groove; drum-to-drum hand movement and traveling patterns; foot pedal techniques; single, double and multiple foot pedal patterns and exercises; many different practice patterns and exercises to increase playing skills; stretching and warm-up exercises; microphone types, usage and placement methods for live performance and recording sessions. Current rates are $20 for a full hour; block rate $100 for six hours. Instruction with two drum sets is provided in Clarkston; off-site instruction is negotiable.
Martin continued to expand his musical skill and knowledge by attending the 2008 Drum Fantasy Camp in Cleveland, taking master classes from Dave Weckl, Steve Smith, Tony Royster Jr., Jamey Haddad, Horacio Hernandez, Ganesh Kumar and David Brewer. Locally, he has studied with Joe Chila, and attended as many jam sessions, drum circles and workshops as he could.
In 2014, Martin began to cut back on his gigging and instruction, deciding instead to pursue other endeavors such as building his own aircraft. He still enjoys attending the occasional jam session, and may be willing take on the right student if circumstances permit. He continues to keep this site active as an archival source for photos and video links.

Uptown Grille, Maple near Haggerty, Commerce Twp. Over 21 only.

Uptown Grille, Maple road between Haggerty and M-5, Commerce Twp, MI. Over 21 only.