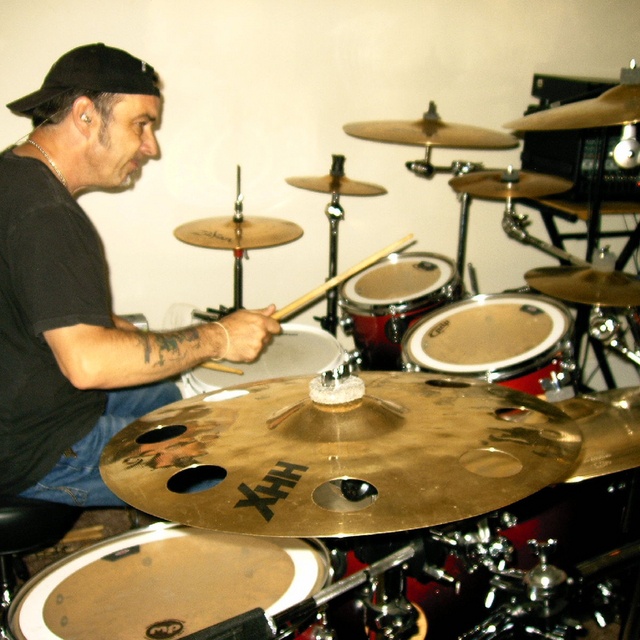 First things first, Thank you for taking the time to look at my add, I hope to hear from you soon, thanks again.

Able to play most genre's of music, I have both live and recording experience. All songs in player at top right include me playing drums on all tracks, which also include different genre's and playing styles I'm able to perform and then some, these are just some examples of my playing capabilities. Looking to play with or to tour with a kick ass band, or even start an original project. I have my own transportation to get to and from gigs. All professional gear, I'm a serious and committed, devoted drummer, see my bio under the influences tab, you may also visit me at /drummyone234 or at /Michael Thetimekeeper Hughes and at My group page Drummers Unite ./groups/190940047721083/
I can be contacted via email at mhdrumz at the spot or by cell phone at 717-224-5629 Thank You for your interest. Hope to hear from you soon...Cause I need to play like a fish needs water. Check out the songs which all but Wake me when September Ends are in snippet format 2 minutes or less, for marketing purposes and recorded at CCC Recording Studio in Coopersburg, Pa. to the upper right hand corner, or the be videos below, *please note and bare in mind that the video nor the audio quality IS NOT of professional quality...Please scroll down...\/ \/ \/ \/ And my photo gallery is below the videos at the bottom, enjoy.and thanks again!!!

About me:
Professional Drummer / Drug and alcohol free
I've been playing drums since the young age of 5, It all started watching my dad's drummer at the time Mr. Leroy Foss, then Ray Shavolak pardon me as I don't think I spelled it correctly, Vic Lewis, and Tommy Weinberger "THANK YOU GUYS" and knowing at age 5 going on 6 that that's what I wanted to do. Made my very first drum set out of my mom's brand new set of Tupperware "she could've killed me" but instead I was encouaged. Funny thing both John Bonham and Neil peart also made there first drumset out of containers and cans...hmmmm So after years of listening to songs over and over and over..mitted practice's, and was brought my first drumset made by STEWART Drums, And started to play professionally at age 12 playing for my dad’s country & western band called “Ben Hughes and the Ramblin’ Men”, which made a record that I played on, the songs were “Big, Big Favor” and “I’d like to try” On the JANDY label, appeared on a cable TV show Out of Levittown, Pa. called The Tommy Redd Show of the Band Tommy Redd and the Reddy Men, appeared on the Al Alberts Show. From that I got to play with some other country artist such Bill Richardson and also did some recording with him as well as played in his band. Played in “Southern Express”, “U.S. Country” good ole' Mac and Maryanne, “Mom Miller and the Boys”, I’ve played in several bands along the way, such as my first band ever formed out of music class called “The All* Rite Band”. Then on to yet another band called “Epitaph” (we were a li’l dark trying to find ourselves)Featuring Joe Skiba on guitar, Cody Stevens on vocals and guitar *( Brother of Tommy Redd, Cody went on to tour with Danny and the Jr's and is the owner of The Vegas Road Show), John Sedorowski on bass and yours truly on drums. And an original/cover band called “Neighbors Complaint”with Bob Weimer on vocals, Joe Skiba on guitar, Frank Veith on guitar, Bill Weimer on bass and yours truly on drums. And an honorable mention and thanks to some good ole friends,Sky Brady, Mike Porter, Frank Doodles aka "CAD", Bobby Luther and Scot Russell. And then Undertow with Bobby Weimer on Vocals, Frank Veith on Guitar,Joel Young on guitar, Bill Weimer on Bass, And yours truly on drums, also an original/cover band, which I still play and record with from time to time - we actually opened for the headliner band The Boxtops at a show in Sept,1986 for "OPERATION KIDS" a benifit concert for abused children Negative One ( a local band from Mayfair )opened for “The Chimes”, their hit “Once in a while” and UNDERTOW ( a local band from Philly ) opened for “The Boxtops”, their hit “The letter”. I also played with “Rusty Dogs”, a country rock band, also played with Tribal Knowledge and opened for the IMC (Independant Music Conference) 06' LIVE at Finnigan's Wake, also played a small venue with Matisyahu's Guitarist Aaron Dugan also a good friend and part of my extended family. And am now currently recording with UNDERTOW and playing with GearHead and Played with a variety band called "Beats Workin" playing “classic rock, country, pop and a little of everything in between” was with them for 5 plus years, did some recording with Kabudi Sackey at Ed Gores Acoustic Underground Studio, also recorded with FireMonkey with Ed Gore at Acoustic Underground and with Bobby Eli at Groove Yard Studio and toured with FireMonkey in 2013 and toured the Pacific Northwest.. I'm currently playing out with a band called Southern Edge... .southernedgeband

Neighbors Complaint 19134 got back together and recorded some original songs we wrote over 30 years ago, and was released November 2018. titled HARRASSMENT.

I had some extensive pro gear, which I lost in a bad fire. Working on rebuilding the equipment.

Conway's BBQ Kuhnsville,Pa NE Ext to Allentown Exit 22w and get off the first exit which is Kuhnsville and it's about half a mile on the left.
From 8-12 come out and support local live music.

Conway's BBQ Kuhnsville,Pa NE Ext to Allentown Exit 22w and get off the first exit which is Kuhnsville and it's about half a mile on the left.
From 8-12 come out and support local live music.

Conway's BBQ Kuhnsville,Pa NE Ext to Allentown Exit 22w and get off the first exit which is Kuhnsville and it's about half a mile on the left.
from 8-12 Saturday Night
come on out and support local LIVE music