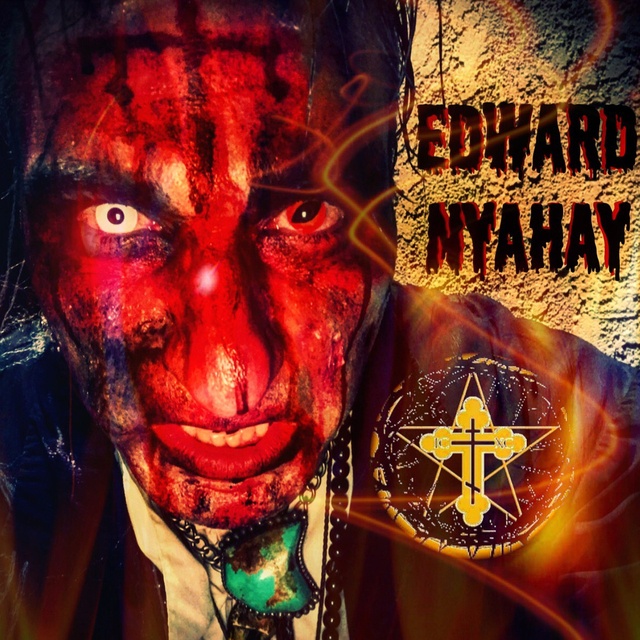 EDWARD NYAHAY is an Independent Artist, classically-trained vocalist under the direction of Kelle Rhoads (Randy Rhoads' brother), Musonia School of Music, as well as, other professional vocal coaches and character development instructors.

EDWARD NYAHAY'S haunted vocals, theatrics and lyrics have created a new genre of music, GOTHOLIC. Combining his Apocalyptic, Byzantine-Catholic beliefs and Gothic influence, EDWARD NYAHAY's three octave plus range allows him to rip into worlds never penetrated before until now. The Battle of Principality lives and breathes within his lyrics, vocals and music, infiltrating the celestial realm. EDWARD NYAHAY has been known to reach down into hell and pull souls out for Christ!

Welcome to the Ancestral Congregation where the living and deceased conjugate. The Gotholic Priest, Edward Nyahay, shines the light of Christ where there is darkness. No sin is too great that God cannot forgive. Find redemption in your soul and pray for your loved ones, living and those beyond the grave.

EDWARD NYAHAY has been a member of SAG (Screen Actors Guild) since 1997, and he has written novels like WINGS OF FLESH: EXPEL YOUR DEMONS ENJOY THE FLIGHT, many feature screen-plays and award winning shorts, and has produced over 2000 be videos on line, and is the creator of many successful be Channels.

EDWARD NYAHAY was part of the Galpin Team that WON the grand prize of fifty thousand dollars on National Television, TLC's "The Singing Office" (2008), hosted by Mel B and Joey Fatone. He also achieved top 15% of all Honda Sales globally, and currently is the Internet Manager at Vista Ford Lincoln.

EDWARD NYAHAY is not a force to be reckoned with, as he stands with God’s Holiest Angels battling demons, and spreading God’s truth and love.

EDWARD NYAHAY is the creator of THE WITCH CHRONICLES, a film series that forces two different religions together that should never be, Catholicism and Witchcraft, starring Max Wasa, Jodie Fisher, Edward Nyahay, Noah Smith and Eugene Nova, and is currently seeking investors for his WINGS OF FLESH: GOTHOLIC WARFARE film series.

I will be performing on TLC's "The Singing Office" late June.