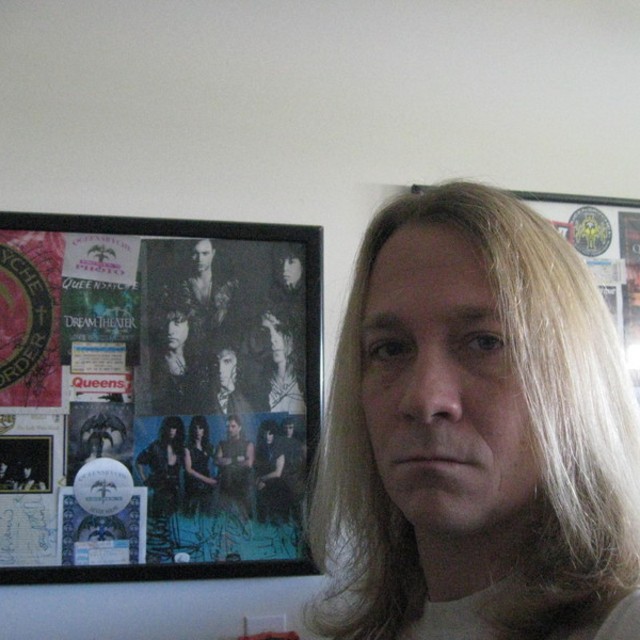 I am a male in my forties who played all over
Florida in the late 80's in many different bands.I was getting close to signing a contract with a major label but instead Life happened. I got married and had children and had to get a regular job to pay the bills.
F/FWD Thirty years later I still
have a major need to rock out.Ive never been able to escape my
musical needs/aspirations, (or the music in my head:)I'm now ready to rock! Im hoping to find others wanting to rock out!!! I want to find other musicians who wish to record original music and have fun as well as hopefully make a living with it.I want to touch people positively with my music and make a difference in my/our/their lives. My music is my therapy.
My voice sounds most like Geoff Tate with more lower register or Roy Khan.I can sing high,low,sweet,raspy,soft or scream.I dont do death metal or thrash.I prefer melodic/progressive metal/rock and also enjoy acoustic sets.Im into the more melodic versus thrash or speed etc.I also love acoustic-style music.I would love to do something Heavy,progressive,classically influenced,dramatic and bombastic in nature like Kamelot or early Dream Theater/Symphony X.I dont want to be in a bar band/cover band playing the "old standards".Playing out is fine but I just dont want to be the saturday night cover band at the local watering hole.Give me a call 904.614.9545 if you think we can make something happen or shoot me a email nightrycheo

Mainly Queensryche,Kamelot,Dream Theater,Symphony X,Dokken,Tesla,Judas Priest,Iron Maiden,Dio,Led Zep,Beatles and most Heavy 70's,80's and 90's as well lots of other more current stuff(alternative/alt-metal)Alison in Chains,STP,Stained,Shinedown to name a few.Im into the more melodic versus thrash or speed etc.I also love acoustic-style music.I would love to do something Heavy,progressive,dramatic and bombastic in nature like Kamelot or early Dream Theater/Symphony X.I dont want to be in a bar band/cover band.Playing out is fine but I just dont want to be the saturday night cover band at the local watering hole.
Currently in my cd player is the new Kamelot...While waiting for new Queensryche :)
Im not listing everybody as there is not enough space here :)

Boss BR8 Digital recording studio,Sure mic, a set of strong pipes and the will and know-how to use them.The sample song here is a rough draft of a song a freind had for guitar that I wrote the lyrics and melody to in about an hour. We recorded it in a metal storage unit in the middle of a hot august night.It is somewhat over processed,but it gives you an idea of how I sound.I will be putting some Queensryche and Kamelot up here soon to show that side of my vocal ability.If interested in working together,email me @ nightryche@yahooo.com