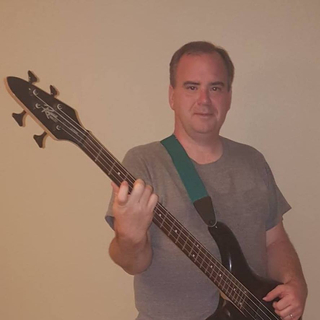 I have been slowly coming around as a bass player. I love making music and my dream is to someday play on a stage with a band behind me. Pre-COVID quarantine, I was playing bass about twice a month for a praise band at church. I've also done seven community theatre musicals for what it's worth. I've released three solo albums since 2012 and I'm ready to take the giant step to booking gigs. I did appear on Jimmy Fallon in June 2020, albeit in his "Do Not Listen at Home" segment ... guess that makes me not just famous but INfamous. My first gig was performing at the gazebo in Elmwood, IL in 2018 during Spoon River - more like karaoke to my own songs - but I did have about 10 people watching.

My earliest memories all involve Paul McCartney & Wings music so that plays a huge influence in my musical style and taste.
And yes, I began air-guitaring left-handed as a result and it's stuck. My dad liked all kinds of music and that influenced me heavily. As a result, my music has a bit of country, classic rock, prog rock, some electronica, a lot of 70s and 80s, and some funk. Other significant musical influences are the Doors, Pink Floyd, Velvet Underground, and the Digital Underground. Someone once as me to describe my genre and I said, "imagine if, at his peak in the 80s, Weird Al tried to do a serious album. It would have all kinds of styles and you would never quite know whether to laugh or take him for real." That's kind of how I am with my music. Most of my songs tend to be about heartbreak and loss but with a catchy beat.