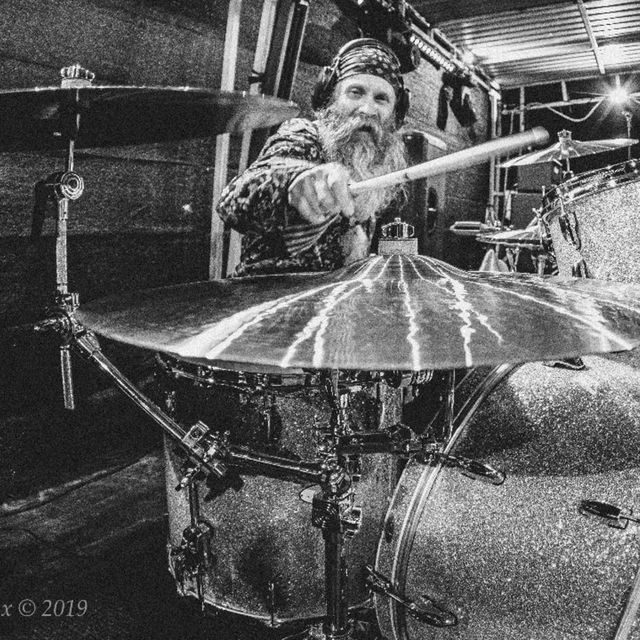 I was actively involved in the LA music scene for many years (I've been playing for 40) nine of which was spent playing drums for guitar great Joshua Perahia. I was involved with two recording contracts during that time.

I'm a solid drummer that when called for, has the ability to think outside the box rhythmically to allow other players to express their ideas with confidence.

I recognize and appreciate the fact that great bands want and need time and dedication from all their members therefore I have opened up my schedule to allow for this. I have several top of the line recording and touring kits. I am currently available for touring but would need to renew my passport for any overseas traveling.

I've always preferred the 'go big or go home' approach when playing live so I've included a couple initial photos of the latest touring kit (26 inch kicks, etc.) Pearl custom made to my specifications last year. Combined with open tuning and the larger (15,20,21,24) Paiste 2002 Black Labels, the 'vintage' inspired sound/look I was after is voluptuous. This kit has custom road cases and is ready for travel.

I feel a band is only as good as its drummer therefor I continue to invest time and money into my craft which includes owning and maintaining a personal rehearsal studio. The studio is available to me at all times for working on material in-between regular band rehearsals and shows.

I'll end this with some footage of me playing with Don Dokken, Barry Sparks (Ted Nugent, B'z) and many other great players at a last minute benefit show several years back (fill in the beginning of the Face.book link):
(fb)/stevebrownleemusic/videos/399186362261/?fref=mentions&pnref=story