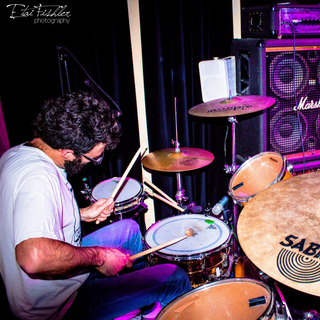 Originally from Tel Aviv, Israel, Eyal now lives in the San Francisco Bay Area in California. When he was 14, he joined his high school jazz band as a percussionist and drummer, and he quickly opened up a rock band covering Metallica songs with friends. Since then, he has studied with various professional drum teachers and drummed with bands and big artists across many genres.

Throughout his music career, Eyal has played in over 600 shows and recorded 6 full albums and many EP’s and small projects. One of the singles he recorded with an Israeli hip hop artist, Quami, became a huge hit, staying at #1 on the Israeli music charts for 3 months.

In addition to drumming, Eyal also produces, plays guitar, sings, and writes songs. In 2015 he co-wrote, produced, and sang on an album which was the result of a longtime band of his friends from high school, UBAXCORE, bringing together a mix of ska, reggae, punk and metal. Eyal is also working on a duo folk rock project called Frisky Bear with his wife, for which he plays guitar and she sings.

In Israel, Eyal was part of an influential punk band, Street Music, which helped to kick off the “Occupy Movement” in Tel Aviv and were the first band to play on the streets of the protest. The most recent band that Eyal played with before moving to California, San Pedro, was an alternative rock group with Middle Eastern influences, and they toured together around Israel for two years.