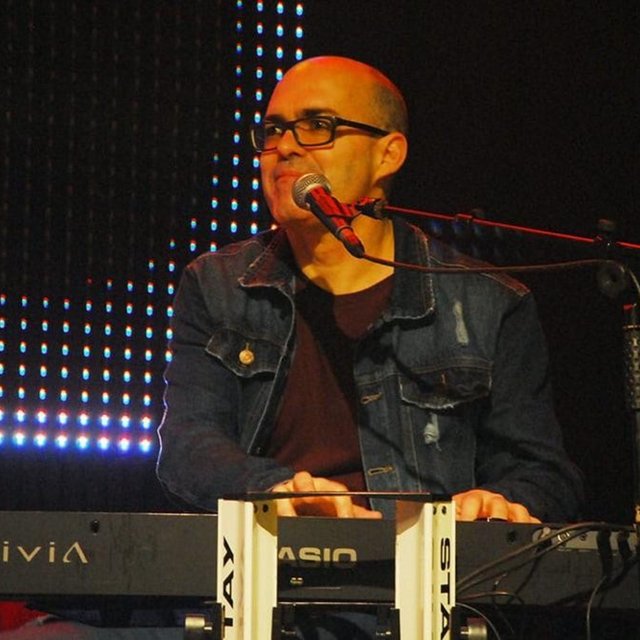 Fabio Augusto
He was born on August 22, 1974, in the city of Catanduva, in the interior of São Paulo.
He started playing at the age of 8 under the influence of his father Jeremias “in memorian '' and together with him and his brothers (Flávio and Fabiano) and his mother Lásara“ in memorian ”, he worked for several years in parties and weddings, graduations and dances in your region. He was also part of the bands STAR SIX and NOVO TRIO, where he performed in several states in Brazil and on TV shows.
In 2000 he started to program the rhythms of the arranger keyboards of the Japanese company CASIO, where the electronics Prince represented in Brazil. After an invitation from São Paulo singer and actress Viviane Keller, he started working in the city of São Paulo, where he also lived for 10 years.
The self-taught musician has been in the music production market for over 30 years and has experience in various recording systems, samplers and instruments, mixing, mastering, providing services to studios, advertising agencies, radio and TV.
In 2003 he became part of the BANDA FICO / Colégio Objetivo de São Paulo festival, as a keyboard player and music director, an event held once a year.
In 2004 he was invited by guitarist and music producer Wander Taffo to play in the band Rádio Táxi.
In 2005 Rádio Táxi recorded its first DVD by Sony Music, F
From December 2006 to February 2014 he worked on the musical production of the RAUL GIL program, directly in the arrangements and tests of Jovens Talentos, from the painting "Who knows how to sing, who doesn't know dance" and "homage to the artist".
In 2010 he joined the company CASIO Brasil as a Product Specialist, providing training in specialized stores and Workshops in Brazil, Argentina, Uruguay, Paraguay, Chile, Peru, Colombia and Panama. In the same year he returned to live in Catanduva and at the end of 2011 he opened the music school “” Fábio Augusto Music Academy ”” being a licensed school E.M.T.-SP
At the invitation of singer and songwriter PENINHA, in 2012 he recorded the DVD “ENSAIO” on TV CULTURA by Warner Music label.
Completing 17 years of services provided for the CASIO brand, in the area of ??synthesis and programming of digital keyboards and pianos, Fábio Augusto met the company in JAPAN, Tokyo in 2013, where he directly transmitted his knowledge and exchanged experiences.
In the same year he was in LONDON for local market research through CASIO JAPAN.
At the beginning of 2014 he started recording 2 instrumental CDs, 1 author and 1 interpreter, with the release for the beginning of 2015!
In May 2014 he visited JAPAN again, where he was again at CASIO to collaborate with the brand's new projects.
In the same month he worked for 3 days in NEW YORK, to research the local musicality, new sounds and trends through the company CASIO BRASIL.
In July 2014 he participated in the PROGRAM FÁTIMA BERNARDES - TV Globo with the singer PENINHA.
In April 2015 he traveled to Japan to collaborate in the creation of the rhythms and timbres of the new Casio arrangers, where he continues today with the projects of the Japanese company.
In June 2015 he returned to play with the singer and composer Maurício Gasperini, in the Show 80s, Mano a Mano and Musicas italianas projects.
In January 2018 he participated in the NAMM show (USA) and in April at the Musikmesse in Frankfurt (Germany).
In 2018 he visited Tokyo 3 times.
On one of the trips he was invited to record the official videos of the new line of arranger keyboards CT-X.
.be/y4Ed-7b3VNo
In 2019 he produced the new project sang PENINHA "Minha História" with the special participation of the singer DANIEL.
In January 2020 he was present at the NAMM show in Los Angeles (USA) with the company CASIO.
He currently accompanies singer and songwriter Peninha and Milton Guedes.
ONE WAY_2 project (instrumental) with Guitarist Mozart Mello and Drummer Albino Infantozzi.

My biggest influences are the 70.80.90 years!
Where they currently make a big difference
where I can apply new sounds and experiences
that I acquired during all these years playing
in Latin America and visiting countries in Europe and Asia