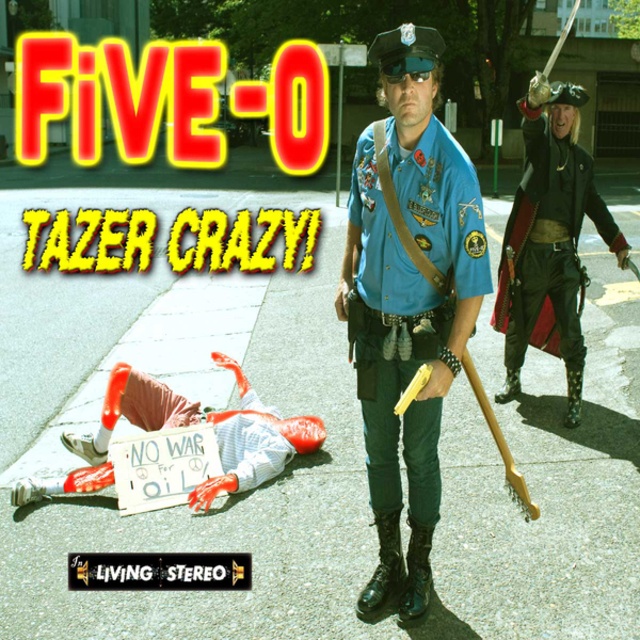 Wired in the same circuitry of great rock bands such as the legendary Dead Kennedy's, Murphy's Law and Minor Threat, FiVE-0 delivers a death-blow against police-state fascism and the snoring complacency of contemporary rock music!
FiVE-0 is not a gimmick. Neither is it safe to pigeon-hole its sound into any particular genre. The music is expertly crafted, performed and recorded, and is chock-full of tasteful melodies and blitzing rhythms. Its the type of music that appeals to punks, hipsters, rockers and pop fans alike. Underground, yet marketable. Songs like Miranda play as a folksy lament for the loss of citizen rights. Billy Club Love, the CD's fourth track, emits hypnotic oscillating tones with crunchy guitar licks that settle into a head-bobbing groove, while the CD's title track, Tazer Crazy, carries the listener through a high-tempo assault loaded with singer Grody Bludflough's electrifying, satirical endorsement of law enforcements latest torture toy, the Taser.
And if Tazer Crazy is a voyage through the brutal crapulence of the modern police state, then Maj. Bludflough is the anti-hero tour guide. Grody is the embodiment of justice gone awry, a symbolic character representing the arrogant, unconscionable behavior too often exhibited by the so-called men and women of law enforcement. Rounding out the recording line-up are bass players Nate Henry and Charles Tinker, and TX native Kali handled all the percussion duties.
Not once throughout the 30-minute, 11 track release, has FiVE-0 neglected its primary mission: crafting great songs that provoke both your brain and your feet.