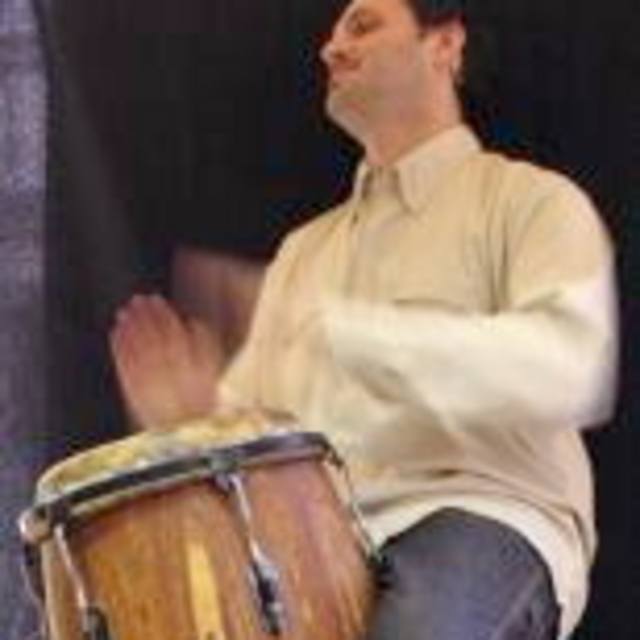 Afro-cuban percussion and their african héritage.

afro-caribean Research : work in progress on the Yoruba, Fon, Congo cultures and their transpositions in Latin America and their interbreedings with the Western music of this last century .

1975 : conservatory of the 4th district of Paris with Francoise Gagneux, trapp drums.

1979 : Congolese percussions with Lucky ZEBILA at the American Center in Paris (crossing of cultures from west Africa).

1980 : Haitian and Cuban Traditional percussion with Jhon AMIRA at the Naropa Center in Boulder Colorado. USA

1982 - 84 : Afro-caribean percussion in the jazz ensemble with Allan SILVA and its C.C.O ( Celestrial Comunications Orchestrated ) will teach thereafter in its institute I.A.C.P in Paris.

1985 : Training course on Cuban Percussion with Jerry GONZALES (assiting for the training courses in Paris at the dance center in paris.)

1995- 98 : C.I.A.M . (Center of Investigation on Music-Bordeaux Activities) percussion Professor on Afro-cuban Afro-Brazilian drumming, program director of the Latin percussion cursus and its Instrumentarium.

1997-2001 C.F.A.T. (Center for Traditional-music and Arts) percussion Professor on Afro-cuban and Afro-Brazilian Percussion and music Director of the polyrythme music class.

2001-2004 : Conservatorio Josafat Roel pineda Lima, Peru, residence on percussions from West Africa and their origines in Latin America and the Caribbean, also their influences in the afro-Peruvian music of this century.

In the following groups:

- first part at the olympia with Paul Mindi

- festival of Jazz to the dunois with the C.C.O of Allan Sylva

- Development of a bloco of samba for mardi-gras at the carnival of San Francisco invited by Bira Almeida, musician, writer, researcher and founder of W.C.A. (World Capoeira Association).

From this experiment, it created the first "batteria" of samba in Santa - Fé, Nuevo Mexico City, the U.S.A. ( bandaged girasol . ) Directing, of "bateria" in several schools of samba in France: "axé " in Paris, "Sarava " with Tours, "Macunaima " in Bordeaux, then form the group " Timbalada Urbana" together an ethnic-heritage ensemble.

- Musician percussionnist of group TUPI - NAGO Samba Reggae Band. This group took its musical sources in the area of El Salvador de Bahia, bastion of the afro-Brazilian culture. This group was sponsored by Etienne Ground-Gil and Rémy Kolpa-Kopoul journalist with "Release" specialist on the Brazilian music. European round and first part of Brazilian artists such as Joao Bosco, Caetano Veloso, Gilberto Gil. Then discographic production of the group under the label Music Melody and caramba productions.

- Musician percussionnist of group ILU-YENKORI , Drums bata and songs dedicated to the Pantheon afro-Cuban and yoruba like with the country pertaining to the ex-kingdoms of Dahomey, (Togo, Ghana, Benign). This troop of dancers, singers and percussionnists were among the first in France to promote the cultures of this Pantheon.

Guide and trainer of the set of themes Rate/rhythm and Family , in the movement of the Reiki activities in Europe (Ibiza, Cologne) and in Canada (Vancouver). It deals with the problematic aspect of the family/rhythm in the context of the group dynamics in the training courses of the future Masters in the art of Reiki de Phillys Furumoto .

In 2000, integrates the Lanaya group at Bordeaux . A repertory of music mandingo, this group took into account the soloist Ousseman souma drum and of dance resulting from prestigious national ballet JOLIBA . Gilles forms part of this group, while bringing the repertory afro-Cuban and afro-Brazilian from which Lanaya will evolve towards a mestisse music. a Change also marked by the integration of artists of various cultures such as, Fato Camara , Mathias Agbokou , Hernandez, Patrice banchereau:akpon.

all cuban and brazillian percussion with some afro-peruvian cajon chincha styles..and the congo and benin specific influences and theyre relationship in the west africain heritage. ..from the past century.

for those interested in workshop proposals or ethno sessions ..i have no problam coming to the states...passeport wise .;so just let me know what your pedagogical projects are ...and i will get back to you .
gilles Premel afro-Cuban and afro-Brazillian percussion Professor.

will be in santa fe playing with nacha mendez cancionera
so if you need another percussionist please write for booking projects.

if anyboidy is looking for a personal latin percussion coach , you are welcom to call upon me .