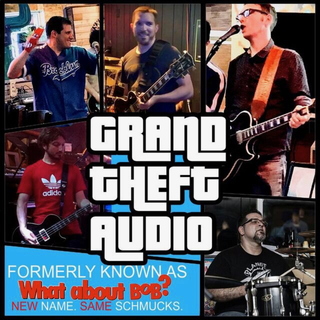 We’re less than a year old but have hit the ground running and have been gigging all over the North Jersey and even Staten Island area. We’ve played in front of 4,000 people at the Mac n Cheese Mayhem festival on 1/25/20. And we’re lined up at Just Jake’s in Montclair on 4/11. If you’re a bar manager, talent scout, or booker, definitely hit me up. We’re definitely interested in events of all kinds, including private parties and weddings. We’re working on getting professional recordings and a promo video, but keep in mind we’re still pretty new and have day jobs!

Musically, we are mainly focused on 90s and 00s alternative and indie rock. We're also going to throw in some more modern stuff, 80s hits, and maybe even some hair metal for the fun of it. It's all good as long as the audience has FUN listening to it.

Visit ./grandtheftaudionj to see our gig calendar and check out video clips and more!

Too much to list, but we all have pro-quality gear.