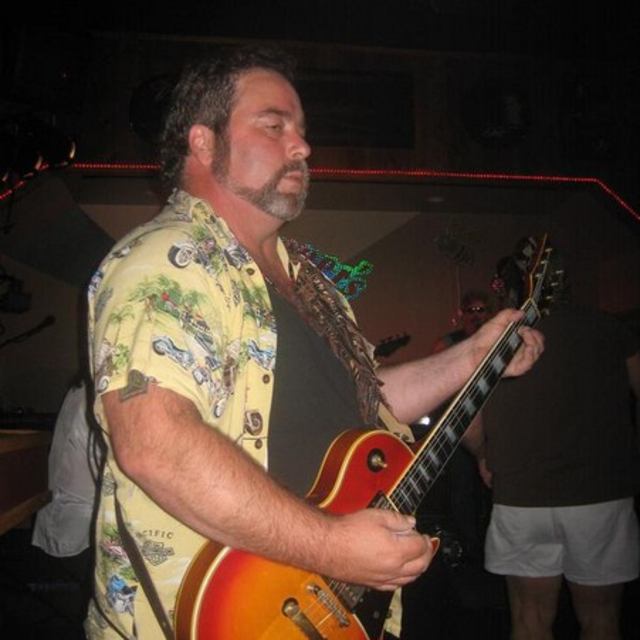 I'll sing, especially backup, and I'll play. I just wanna play music. No bullsh*t ego problems...I just like rockin' the house. 517-317-2369, or LeisterGJ AOL The band I'm currently playing in around Bronson MI has dryed up, so I'm looking for one that plays out a *minimum* 2-3 times a month. Click the player thingie in the upper right for a sample of my guitar and vocals.

Classic Rock, Blues, Southern Rock, Honkey-tonk Country. Pink Floyd, Bob Seger, AC/DC, Eric Clapton, George Thorogood, ZZ Top, U2. I'm also a fugitive of the Hair Bands, but don't be scared. I will play some country, but I tend to stay away from sad-assed blubber-in-your-beer crap. If I could pick more than 3 genre's, I'd take Celtic, Cover/Tribute, Country (meh-Honkey-tonk), and Metal.

1973 Les Paul (accept no substitutes) on a Sennheiser cordless system. Not afraid to step out into the crowd and stir their asses up! This goes through a Zoom multi-effects pedal into a Crate 120W 2-12 amp. Nady SP5 mic on a boom stand for to sing from, man... Frankly I'm a better backup singer, than a lead singer. I'll sing lead on some of 'em, though. Also own a Dean V-coustic, a Yamaha 12-string, and Epiphone acoustic. I'm also slowly teaching myself to play a beautiful Ovation electric mandolin my son gave me for my birthday... ;) Also got a 500W(250 x 2) 10-channel Behringer PA head, but no mains or mons.

Halloween at Wacky Jac's in Angola, IN

Labor Day outdoors at Circle B Campground in Angola, IN

Wacky Jac's in Angola, IN