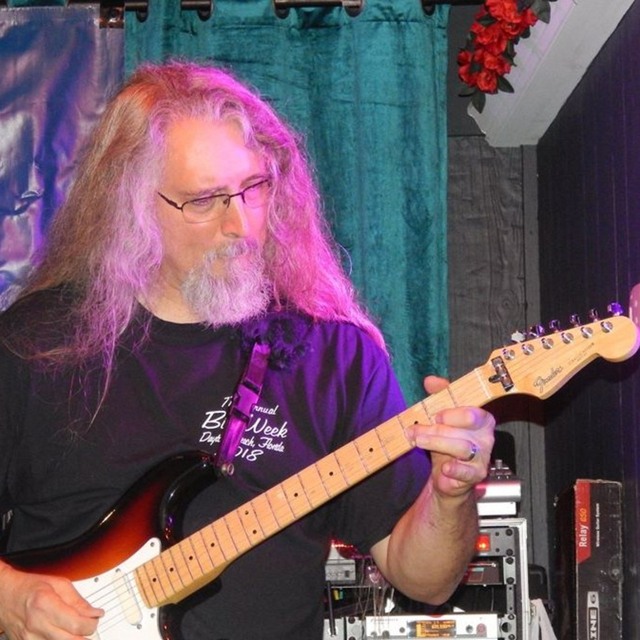 In a nutshell, looking for any of the following:
- a band to join
- fill-in/substitution spots as a guitar or bass player
- a spot in an acoustic duo or trio
- studio work

Commentary regarding the audio tracks can be found below if you have the time. Thanks for stopping by.

Now here's a little bit more about who I am...

If you know what the line above means, or what it comes from, you have a good idea of where I'm coming from. I picked up my first guitar on Christmas Day, 1970. Since then, I've started bands and I've joined bands. I've gained experience playing with lounge groups, oldies bands and various forms of rock bands from classic rock to contemporary and hard rock.

My primary instrument is guitar, though my first instrument lessons were on the piano. Having never pursued keyboard training seriously, I'm more of a fill player on keys these days.

I sing lead and backing vocals. Songs like Plush, Interstate Love Song (STP), Precious Declaration (Collective Soul) and Bad Things (Jace Everett - True Blood Theme) are typical of my lead vocal register, for example, and my falsetto range (for harmonies) is "up there" (for example, the high harmony in the chorus of Another Rainy Night by Queensryche).

I have two years of high school music theory behind me that have served me well over the years. I can read music (but am rather out of practice), chord charts, diagrams and tabs.

I haven't written much lately, but I have written a few tunes. I have recorded one demo of one of my tunes, on which I covered the drum track, bass, two guitars, keyboards and three-part vocals, all on a Tascam four track cassette recorder. Crude copies of a couple others have made it to tape over the years. I used one of my originals for my high school senior year final in Music Theory, for which I scored (wrote out) parts for drums, piano, bass guitar, rhythm guitar and vocals. (I wish I'd kept of copy of that! We grow old so soon and wise so late!) With the help of some classmates, the work was performed. It was interesting to hear how it all came together!

I have produced demos for two cover bands I have worked with. The cover demo we did for Grendel had us working a good chunk of time in Lake George, NY that summer.

Speaking of bands I've played with, here's a rundown of some of the more memorable ones, starting with the most recent... Wide Awake, Bad Karma, Hedon, Tuesday's Brew, Paradise Alley, Grendel, Crosswind, Drakarr, Afterimage, High Rise, Emanon, Daybreak, R.C.Holding and others.

While I don't regularly do studio work, I would entertain the idea of contributing or lending a hand on the projects of others if the opportunity arose. I really enjoyed working in the studio.

Here are a few things I am NOT about. If you're looking for someone to cover these interests, you're on the wrong page.
- country music
- "Play That Funky Music"
- rap/hip hop

So, what am I looking for? These days, I'm looking for melodic rock, something that takes a little thought to play, with big vocals, meaning organized harmonies, not just "gang" vocals or a bunch of folks just shouting into microphones. See "Influences" below.

A few words about the tracks presented herein... The first track was recorded at a great little studio in Ballston Spa, NY when I was a member of Crosswind. The lead vocalist on this track is yours truly, as is the lead and rhythm guitar work. The second and third tracks are from the Grendel cover demo we did. These were recorded, mixed and mastered on my Tascam Porta-One 4-track Cassette recorder. I did all the lead and rhythm guitar work. The lead vocals on the second track are mine. Lead vocal credits for the third track go to Lisa Led, who pretty much was the voice of Grendel. The fourth track is me, my drummer Roland and my Tascam 8-track digital recorder. All Roland does is drum. All other instrumentation and vocal work is yours truly, for better or for worse. I had a couple of goals for this demo. First, I needed to gain experience with my 8-track digital recorder. Also, this demonstrates my understanding of lead and harmony parts, vocally and instrumentally. It also includes a "what if" harmony lead guitar part or two. The fifth track is me on lead guitar on the intro to an original track by Afterimage, recorded at Woods End in Saratoga, NY.

If any or all of that sounds like what you may be looking for, drop me a line. In the world of gmail, I'm known as tdkguitarman ( tdkguitarman at gmail dot com ). Mention my Bandmix listing in the subject line.

Wide Awake flies into The Towne Tavern in Averill Park for the evening.

Bad Karma returns to The Meadowbrook!

Bad Karma returns to The Roadhouse!

Join Bad Karma as we rock the house (or the tent, whichever the case may be)!

Bad Karma returns to The Tugboat Tavern in Cohoes, NY.