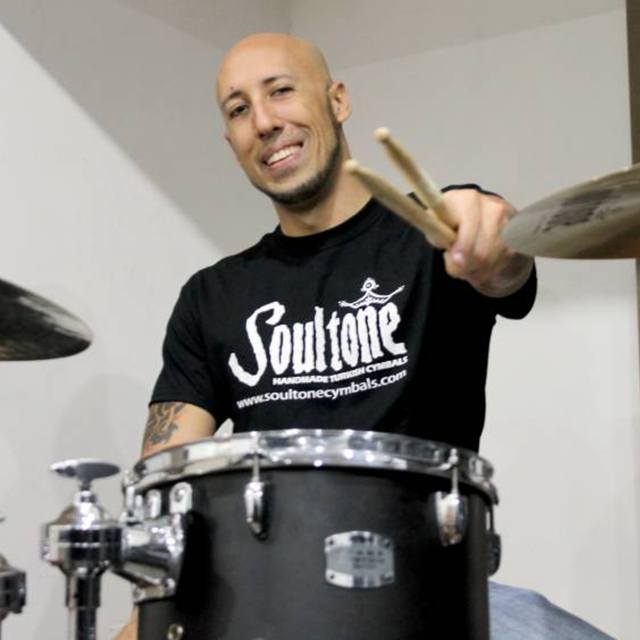 Born in Caracas, Venezuela in 1981, Gustavo Morantes began his musical career in 1996 when joined the grunge band “Gas” as lead guitar. With this band Gustavo participated in a national music festival, “III Festival Intercolegial de Rock”. In early 1998, Gustavo awakened interest for the drum set because some of his friends from the band “Numb” decided to merge the two bands to found “Candy66”. During the same year Candy66 recorded their first studio album Pop, but Gustavo did not have enough experience to record the drums. However, at the end of that year he began to play in their live performances, and started to develop as a drummer when participated in the composing and recording process of their first iconic songs "Madre" and "Burrera."
Later on, in 2000 Candy66 wins in the music festival “X Festival Nuevas Bandas”. As a consequence the band got motivated to continue growing, and participated in other music festivals nationally and abroad, such as the SXSW in The U.S. in Austin, TX in 2001 beside Genitallica and Aterciopelados. During this year Gustavo also participated as jury of the “IV Festival Intercolegial de Rock de Venezuela” furthermore, he performed with Candy66 in the project “Teletón por la Vida” in Venezuela for two consecutive years 2001 and 2002. Additionally, he performed in the “Caracas POP Festival” in 2002 sharing stage with Korn and Papa Roach, where more than 40,000 people attended. Also the band received invitations to play in musical tributes of Venezuelan legendary bands, as “Dermis Tatú” and “Sentimiento Muerto”, for this last, Candy66 made a version of the song “Cabeza” which was included in a discographic album released in 2002 by a Venezuelan foundation, called “Fundación Nuevas Bandas” the album was entitled “Lo-Fi SM”.
Subsequently, the band performed live in numerous venues nationally, and then signed with the record label Latin World, which allowed them to record their second studio album in 2003, but for Gustavo this was his first studio album, known as “A+”. This studio album included a theme titled “Fe” which was in a video clip on the cable channel MTVLA. This material prompted the band allowing them lot more presentations in other countries, as Colombia and Bonaire. Hereinafter, the group decided to launch a live album, entitled “5 Mundos”, where included their most popular themes and one studio theme called “Negativo.”
In mid-2005, Gustavo and his brother José Alejandro left Candy66. However, that year both started a musical project known as “Minerva” with the accredited singer-songwriter and entertainer Dave Capella; the band acquired recognition rapidly and were invited to the show Tour de Nominados MTV in Caracas in 2006. Unfortunately, at the beginning of 2007 with Dave’s country departure the group split off.
However, Gustavo immediately began a personal project, but it got interrupted because the band “Damper” called him to become official member and to perform live in a national tour when his debut album was launched. All together made the 4th place in the international music contest La Factoría, in Spain also they won the MegaVJ music contest organized for the well-known national radio station “La Mega.”
Gustavo did live drummer collaborations to the “Aerea” band and the Mexicans from “Roboto” while in Venezuela, just until early 2013 when he returned to Candy66 exactly to the release of their fourth studio album Nueva Guerra which included the single “Antisocial.” This single led the top of the record report in the first week of May, 2013.
From 2013 until nowadays, Gustavo did three national tours with his original band Candy66 taking part in his customary participation as composing and recording. Later on, the band was nominated to the award Pepsi Music in both years 2013 and 2014, competing with great bands such as Caramelos de Cianuro and La Vida Boheme.
Likewise, Gustavo was invited by YAMAHA to give a clinic to their students in 2014. Also was invited with Candy66 to numerous editions of the most important festival in Venezuela, known as Festival Nuevas Bandas around six times, and obtained several nominations and awards in the Premios Unión Rock Show for 3 consecutive years from 2013 until 2015, also Gustavo was part of the jury in 2014 and 2015.
Recently, Gustavo prepares himself for a new album for Candy66, starting the recordings in mid-2019