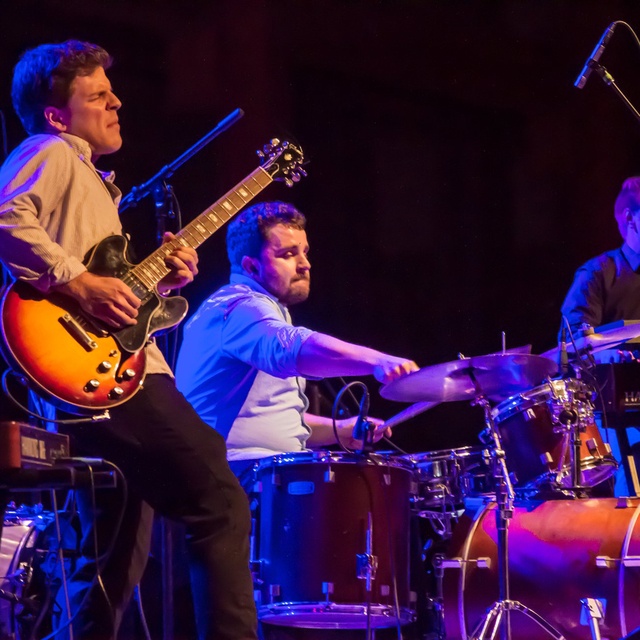 “Creating your own lane in the music industry isn’t an easy feat, but Philly based jazz/ funk band Hambone Relay have already solidified themselves as one of the grooviest groups on the East Coast.” (James G. - Vain Culture)

With elements of blues, jazz, funk and rock & roll, Hambone Relay redefines the modern organ trio with their unique brand of improvisational jam music. Since their founding in 2012, the band has played between 75-100 shows a year touring up and down the East Coast and have shared the stage with such great bands as Melvin Seals and JGB, Zak Deputy, Cris Jacobs Band, Swift Technique and The James Hunter 6.

The band was founded in 2012 by organist Mark Brown. He began his career playing keyboards with the Baltimore-based jam band The Bridge. When The Bridge went on hiatus in 2012, Mark founded Hambone Relay in the Philadelphia area where he currently resides. The band began playing a handful of shows and festivals and started to gain some recognition in the area. This would eventually lead to them recording their first album. The self-titled LP would feature 8 brand new original songs and 2 covers recorded live. This first album featured Devin Coleman on guitar and Kyle Moken on drums.

Shortly after recording this first album, the band went on a brief hiatus and returned a few months later with new guitarist, John Udinsky and drummer Rob Tait. Their touring schedule picked up quite a bit in 2016 and the band began playing cities such as Richmond, Charlottesville, Baltimore, New York, Burlington and Washington DC, growing a fan base and beginning to work on new material. In November of 2016, Hambone Relay released their second LP, “Free Hugs”. The album included 10 brand new originals featuring the guitar skills of John Udinsky and the sheer energy of Rob Tait on drums with Brown at the helm behind the Hammond B3. After releasing “Free Hugs” the band toured the East Coast frequently for the next year and a half.

On February 16, 2018, Hambone Relay played WXPN’s “Free At Noon” concert to a packed house at World Cafe Live. John Udinsky had left the band and Luke Ferracone of The Groove Merchants had taken his place. The band shared the stage with British R&B singer James Hunter which would lead to a short tour in supporting The James Hunter 6 playing City Winery in New York City and MusikFest Cafe in Bethlehem, PA. Following this successful run, the band would hit the road for the rest of 2018 growing and writing new music along the way.

In 2019, Hambone Relay finished recording their third studio effort which had been over a year in the making. The album titled “Say Hi To Earl” was released on May 3, 2019 and features 8 brand new songs plus one cover of Ray Charles’ anthem “Let’s Go Get Stoned”. The track showcases friend and talented music man from Baltimore, Jordan August on lead vocals with scorching bluesy backing vocals from Philly’s own Emily Drinker. “Say Hi To Earl” is available on CD, digital download and vinyl.

Since forming in 2012, Hambone Relay has released 3 full-length studio albums, an EP, a live album and a vinyl record. With the release of their most recent effort, “Say Hi To Earl” the band intends to tour non-stop promoting the album, playing festivals and venues up and down the East Coast. They are currently working on a series of live albums called “Like A Rocket..But Louder” which are to be released every few months. They will be available for free on the band’s official website. Their live shows are a mixture of danceable grooves, psychedelic overtones and improvisational jams. Catch Hambone Relay live at a venue near you!

Screen name:
hambonerelay
Member since:
May 15 2019
Active within 2 weeks
Level of commitment:
Touring
Years together:
6
Gigs played:
Over 100
Tend to practice:
1 time per week
Available to gig:
4-5 nights a week
Age:
39 years