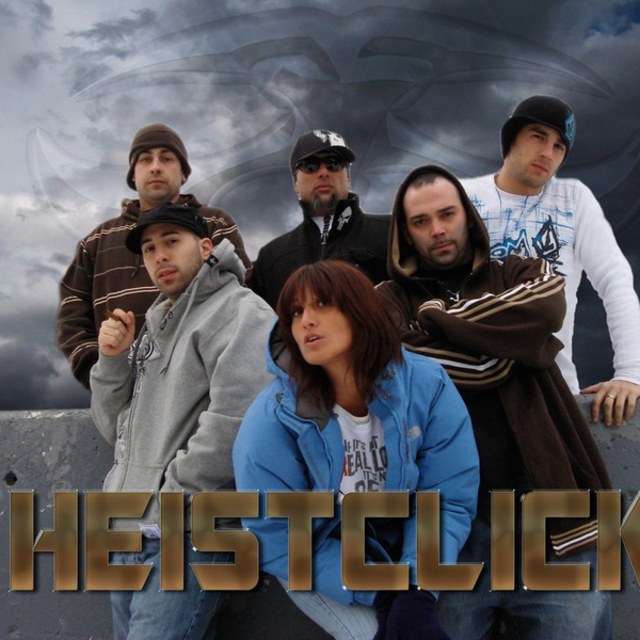 Heist / â€˜hist/ (1865) 1 slang: to lyrically commit armed robbery. Click / â€˜klik / (1581) 1 to succeed. From the heart of hip-hop and the depths of rock-and-roll soul, the alternative hip-hop group known as â€œHEISTCLICK" brings you the next evolution in music. This fusion of original driving rock beats and hip-hop inspired lyrics is set to shake the very foundations of the industry. With this intense combination of music â€œHEISTCLICK" draws influences from a vast array of artists including: Ozzy Osbourne, Metallica, The Red Hot Chili Peppers, Wu Tang Clan, Biggie Smalls, EPMD, and Rakim just to name a few. â€œHEISTCLICK" introduces themselves as: MC CUTTA, COUNT BANKS aka â€œTHE COUNT", PETRO aka â€œSLY LYRICAL", FRANK CASTLE aka â€œFACEMAN", and their recent addition "Jani C." â€œHEISTCLICK" prides themselves on their Bronx/Queens roots, and their unconditional respect for hip hop and rock music as heard in tracks like: the attitude filled â€œSuck My Click", and the heart-pounding â€œSuper Powers". In the song â€œLast Rights" they show a darker side to their personalities, as well as, a remarkable display of lyrical talent. Their debut album â€œSuper Powers", contains fourteen tracks, and is a one of a kind musical assault that will drive you to the edge of your imagination, leaving you begging for more. â€œHeistClick" wrote, and produced all of their own music and recorded and mixed down the material in the Boogie down Bronx.