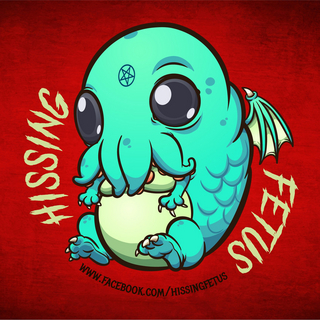 Chosen by an ancient prophecy, each of these people were tasked with a role to play in the impending FETOCALYPSE! Mitchell, the Treble Master...ancient astronaut and destroyer of worlds! Jarrid the Twang-A-Langer who can speak with dolphins and rules beneath the aquarium! Scott, the Skin Slapper, He Who Sees the Future in every bite of a chilidog, and Jason, the Child of the Low Places who makes the intestines of the world rumble with discontent! With our fetus powers combined, we are the unstoppable...the unholy....the the ever hungry....the Stygian Horror of Eldritch Eons PAST......

Mitchell was the first. Goaded into action by twisted dreams and visions of snake-like children running through the shadows of the bayou, Mitchell cried out in confusion and was answered by the second, Scott.
Scott could feel the air charged all around him from the might of Mitchell's cry, but only he could hear the rhythmic pulse of the Fetus's heart and together with Mitchell's voice, they crafted the chant, and in turn that chant was heard by the third...Jason.

Jason, upon hearing the beat and the chant was powerless to stop his trembling hands from crafting the next part of the mystery, the groove, and with the groove now alive in his hands, the three of them carried the sound even further, until it reached the ears of the fourth, Jarrid.

Jarrid, unable to contain the raw power of what was now an unstoppable maelstrom of musical manifestation, presented his instrument to the Fetus and maintained the melody, and as this melody wound into the mix, the Great Fetus rose before them and bestowed the mysteries upon their brows. The task was presented, the prophecy unleashed, and now, with their powers combined, they stand upon the steely precipice of horror and glory, the key to the FETOCALYPSE in hand and all that remains is to open the door!

We have some, yes. Thank you for asking.