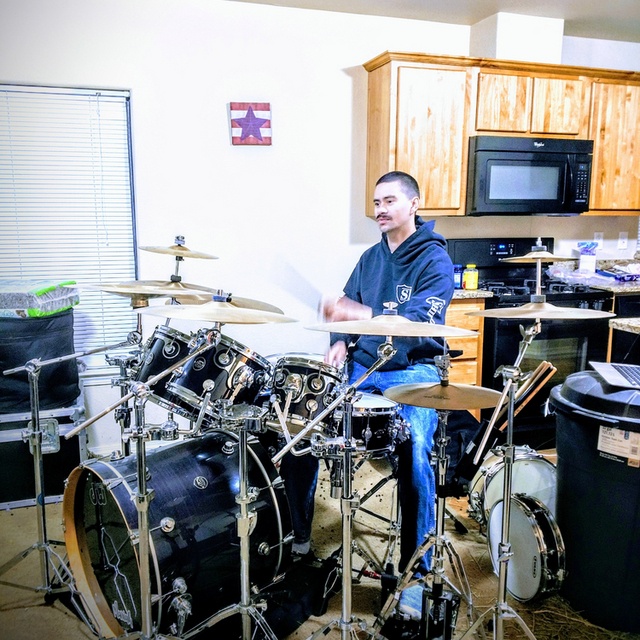 I'm Ian I've been playing drums 24 years. I've been singing 17 years guitar for about 15 years but only seriously played guitar for about 2 years. Im looking for a vocalist preferably female and lead guitarist and bass player to do some recording and gigging of some music similar to a lot like birds and bands of that nature. Also would like to do a liquid metal project like the band spirit box or Destiny potato something of that nature.

I play dw drums and have 2 different dw kits. Currently have a 17 piece dw kit with primarily Avedis A series custom zildjian cymbals have some meinl and paiste and sabian as well. I have a sm-57 mic for my vocals a peavee stack for my guitar or vocals or bass don't currently have a bass guitar up here in alaska. I have a native American drone flute I play around on still learning that same with ukelele. For guitars I have a Yamaha acoustic and a Epiphone Les Paul and a fender custom shop strat. Eventually am going to get a nice mixing board and some pa speakers for the house and some studio equipment for recording more professionally. But I have a lot of connections in music in Alaska and know a few friends with recording studios and all as well. I've played mostly drums professionally on and off the last 18 or 19 years mostly at church growing up. But had a thrash metal band in highschool I did drums and backup vocals with we recorded a ep 4 song CD. Under the band name cult of the damned. More recently I play in a country band up here doing mostly drums and some vocals RCB for the last 3 years on and off. And was in a professionally signed band Mammoth lord as the drummer for about a year signed with northern chariot records but had a falling out with the guitarist. So I mostly just paly professionally with the country band now. I want to get into some different generas myself and explore my liquid metal routes folk and indie and punk rock, emo music routes.