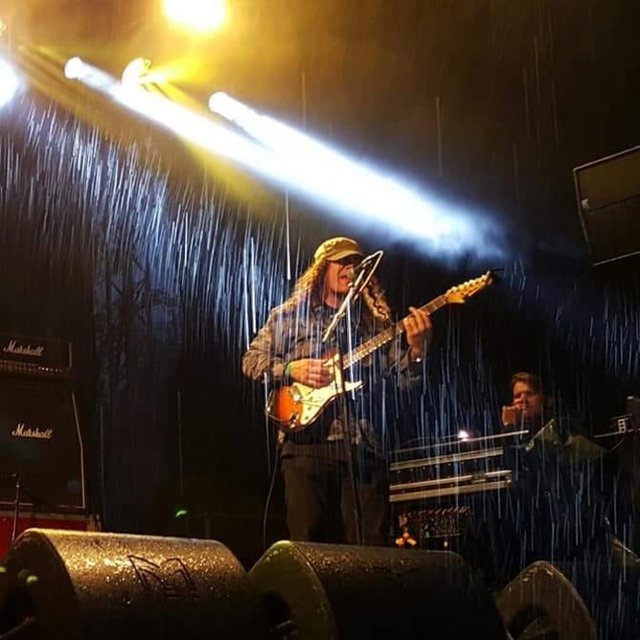 "If you were to dedicate the rest of your life to easing suffering in the world - now and into the future - what would you do? How would you do it?"

"The most talented musician I have ever seen...on any stage in the world...or even heard of!!!...I've never even HEARD of anyone like that...plays EVERY instrument well....??"

"Help the hopeless, the helpless and the health-less!!!"

Musical genius or musical slu+? (or narcissistic, reclusive, newTuber junkie!!): "I will play ANY instrument, in ANY STYLE, with any one, for any amount of money - (to go entirely to charity!)"

ALL & ANY INSTRUMENTS! Keys, ALL stringed/bowed, ALL woodwinds, ALL brass, ALL percussion...

James Graff has recently settled down with his wife and two boys...just before that he had been touring Europe with the opening, warm up act for WASP:

singing all the higher back-up vocals (“hitting” a high C every night?!? I have plenty of live recordings!) and playing multiple keyboards in multiple time signatures and multiple rhythms in each hand (I had to learn ALL the parts WITHOUT any instrument -totally absurd-by transcribing them onto plain paper on the airplane from New York to Europe!! )

WASP WORLD DOMINATOR TOUR...(I got to hear the live recording -only once...copyrights- of when we auditioned for Road Runner Records while being broadcast LIVE over the radio to over 50,000 listeners!!)”

SANG AND PLAYED MULTIPLE INSTRUMENTS ON
5 CONTINENTS IN
40+ COUNTRIES
IN FRONT OF TENS OF THOUSANDS
IN BANDS WITH MEMBERS FROM MANY
INTERNATIONALLY FAMOUS (Am I??....NO!!),
"HALL OF FAME",
MULTIPLE BILLBOARD CHARTING,
MULTIPLE GRAMMY AWARD WINNING,
MULTI-PLATINUM ACTS:

"I also fronted (sang lead), played lead guitar and keys for 'The Mad Hatters'"
(Now just "The Hatters" - produced and tour supported several albums on Atlantic Records)
"I lost touch with them until - one day - I rediscover my old friends - featured in Guitar for the Practicing Musician magazine! Nice!"
://graffjamie.blip.tv/
://picasaweb.google/graffjamie

"I gave one of the graduation speeches at Mountz Grammer School, Spring Lake, NJ, (except mine was a scathing rebuke to all the adults who had completely screwed up the environment and world politics for my generation to try and fix)."

"I was president of my class at Manasquan High School, NJ where I:
...wrote, arranged, sang lead, played piano and lead guitar on an album we recorded my freshman year...
...acted and sang lead in all different sorts of events - rock concerts, choir concerts, musicals and plays...
...I was accepted into the "Acappela Choir", "Mary's Canarys" (came in 2nd in State Competitions) and the "All State NJ Choir" .

"Fantastic!! This is really great!"
"I LOVE THIS...."
"that was amazing :)"
"Best thing I've seen on be!!!"
"You rule!!"
"Suuuuuuperb"
"Pure Geneious!" (sic)
"Wow! Awesome! absolutely killer"
"This guy is REALLY REALLY REALLY REALLY Talented!"
"this guy is amazing! i've been watching his videos like all day. One of the most talented guys i've seen"
"vocals are unreal as others have said"
"he have the voice like bon scott ^^ love this :-)"
"Really great voice" .... "you've got a great voice"
"do you do any bon jovi covers,your voice is like jons"
"You rule man, that's a magic cover ;-) 5/5"
""F**K ME RUNNIN'".........this is the s**t"
"Wow! That's a great video! With great music too!"
"Great song! And the video is hilarious"
"Great song, vocal, instrumental....you do it all james!!!!"
"great song! :D" .... "great tune!" .... "cool song are there more?"
"Holy good God... That's insane... You are definitely one of the greatest "
"All of the positive comments here are well-justified. you are so awesome! :)"
"What amazing piano playing. Great singing too."
"Awesome playing and singing"
"You are so talented, it is amazing."
"definitely the best cover of this song i have EVER heard, i really give you props for that! EXCELLENT JOB!"
"awesome song... Omg the man rocks!"
"You are so talented, it is amazing. What an inspiration."
"simply the bee's knee's, top class"
"Absolutely fantastic cover. In some ways even better than the original. Keep it coming."
"Excellent cover, very very good job! Loved every second, covering Pink Floyd is a tough act. Well done!"
"Absolutely wonderful cover! EXCELLENT vocal work and BLAZING guitar! Absolutely outstanding! Did I mention it was very good?"
"awesome playing 1 of the best ive seen 5*"
"Somehow I find this as the best cover of "Comfortably Numb" all over be. Your voice is far beyond beliefs and I find it kind of funny; how you manage to do it so perfectly. I'm sure PF is, if they heard your cover, full of jealousy. I don't claim or state that your version is better than the original. But this cover is special, mayhap a masterpiece. I think I just fell in love with your art. Keep it up, you are good!"
"wow man that was f***ing perfect, while i was reading the comments i forgot this was a cover and i thought i was listening to the real song"
"Best cover i've seen by far!"
"whoa! that is by far the best cover of this song ive ever heard."
"You guys did the best cover of "Would" that ive ever heard..be it, internet or at the bar...awesome job..keep it going!!"
"Awesome...You guys are as good as I have heard also..Keep after it."
"this has got to be the best cover AC/DC ever!!"
"improvised piano playing
My name is Michael, I just watched a video of somebody playing the piano and I am guessing it was you who was playing the piano in the video. Its very inspiring and it blew my mind. I just had to say it was fantastic."
"U must b paying people 4 these comments."
(THOUSANDS of more comments on be!)

You name it!
Bach to Chopin to Joplin to Tatum to Parker to Coltraine to Zep to Beatles to Beck to Bonamassa to K.C. and the Sunshine Band to Commodores...