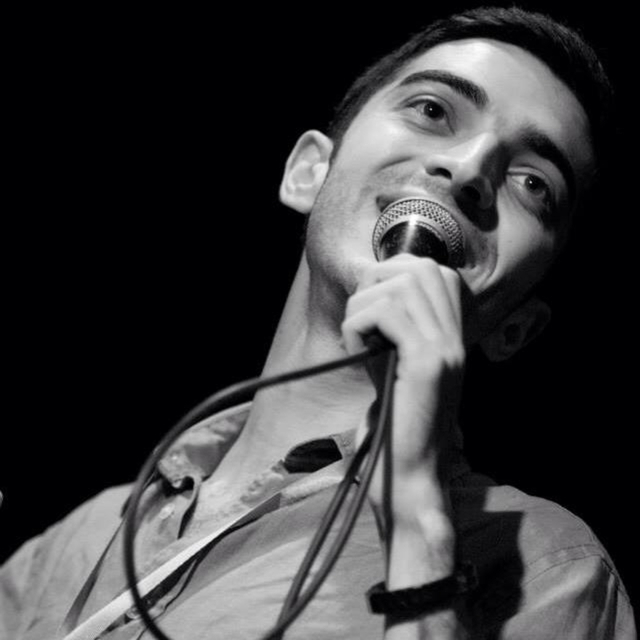 Rafael Hovanesian (or Hovhannisyan) is a young jazz singer aricist.
He was born on September 6, 1991, in Yerevan, the capital of Armenia. Rafael has been inspired by Jazz since early childhood being impressed by the music of the legendary Louis Armstrong.
The very first time he appeared on the big stage was in children music show on Armenian Public Television “Do-Re-Mi” in 1999, when he was only eight years old.
He took private vocal courses at Yerevan Komitas State Conservatory (YSC) and graduated the College of State Song Theatre of Armenia in 2011.
At that time he also got a bachelor's degree of the "Faculty of International Relations" at Yerevan State University (YSU) and then left the master's degree course to pursue a career as a jazz vocalist.
Rafael has been taking special jazz master classes by one of the most popular and renowned Armenian contemporary jazz musicians Vahagn Hayrapetyan (piano player, composer, singer) since 2012, who studied his manner with Jazz be-bob legends Barry Harris and Frank Hewitt in New York and collaborated with many legendary musicians.
Rafael has worked with New York City organist/pianist Brian Charette, who has established himself as a leading voice in modern jazz. Charette is a Grammy-nominated, Hammond-endorsed artist. Besides being a critically acclaimed composer and bandleader, Brian has worked with notable artists and musicians such as Joni Mitchell, Chaka Khan, Michael Buble, Tony Desare, Bucky Pizzarelli, Mike DiRubbo and many more.
In Armenia Rafael has cooperated with the Armenian State Jazz Big Band (art director and conductor: Armen Hyusnunts) and performed with that legendary big band at Cafesjian Center for the Arts (Cascade complex). He has also performed with some of other leading armenian jazz bands in different jazz clubs and concert venues in Yerevan such as the Malkhas Jazz Club, Ulikhanyan Club, etc.
"H.A.R.M.O.N.Y. Jazz Alliance" (USA, Georgia, Atlanta – American Jazz community united in promoting, pushing and publicizing jazz musicians) became interested in Rafael’s music and some of his recordings of jazz standards were sent for promotion in local radio-stations of Atlanta in 2012.
Rafael Hovanesian has performed not only in Armenia but also in Europe, he has shared the stage with well-known jazz musicians such as Brian Charette, Vinzenz Kummer, Matt Fishwick, Vahagn Hayrapetyan, Zaid Nasser, Tomáš Vrtek, Nikoghayos Vardanyan, Yervand Margaryan, Armen Tutunjyan, Jan Fe&#269;o, Oliver Kent etc.
He concluded the International Czech Jazz Workshop (2015) in Prague.
Rafael lists his influences as Johnny Hartman, Mark Murphy, Joe Williams, Chet Baker, Mel Torme, Marion Cowings, Bobby McFerrin and Kurt Elling. The minimalism and emotion of Charles Aznavour was also influential. He is deeply inspired by the music of the legendary Armenian jazz diva Elvina Makarian, whom he calls as his 'musical mother', and world renowned Armenian jazz singer Datevik Hovanesian.
Rafael has received the praises of jazz masters such as Marion Cowings, Paul Bollenback, Brian Charette, Vinzenz Kummer, Bill Warfield, Gavin Skeggs etc.